[SatNews] MESSENGER has delivered its first image since entering orbit about Mercury on March 17.

The images was taken on March 29th at 5:20 am EDT by the Mercury Dual Imaging System as the spacecraft sailed high above Mercury’s south pole and provides a glimpse of portions of Mercury's surface not previously seen by spacecraft. The image was acquired as part of the orbital commissioning phase of the MESSENGER mission. Continuous global mapping of Mercury will start on April 4. “The entire MESSENGER team is thrilled that spacecraft and instrument checkout has been proceeding according to plan,” says MESSENGER Principal Investigator Sean Solomon, of the Carnegie Institution of Washington. “The first images from orbit and the first measurements from MESSENGER’s other payload instruments are only the opening trickle of the flood of new information that we can expect over the coming year. The orbital exploration of the Solar System’s innermost planet has begun.”

Integral Systems, Inc., (Nasdaq:ISYS) congratulated NASA and the Johns Hopkins University Applied Physics Laboratory (APL) for successfully inserting the MESSENGER probe into orbit around the planet Mercury. "Integral Systems congratulates NASA and APL on the success of the MESSENGER mission as the MESSENGER probe became the first spacecraft ever to enter into orbit around the planet Mercury," said Paul Casner, CEO of Integral Systems. "MESSENGER has traveled almost five billion miles, completed 15 orbits of the sun and traveled at an average speed of 84,500 miles per hour on its way to Mercury. The recently published pictures of the surface of Mercury sent from MESSENGER are a testament to the remarkable engineering accomplishment."

Integral Systems has been an instrumental part of the MESSENGER program, providing its EPOCH Integrated Product Suite (IPS) satellite command and control software solution. EPOCH was used during the Integration and Test (I&T) phase to ensure the spacecraft's flight readiness and continues to support on-orbit operations. 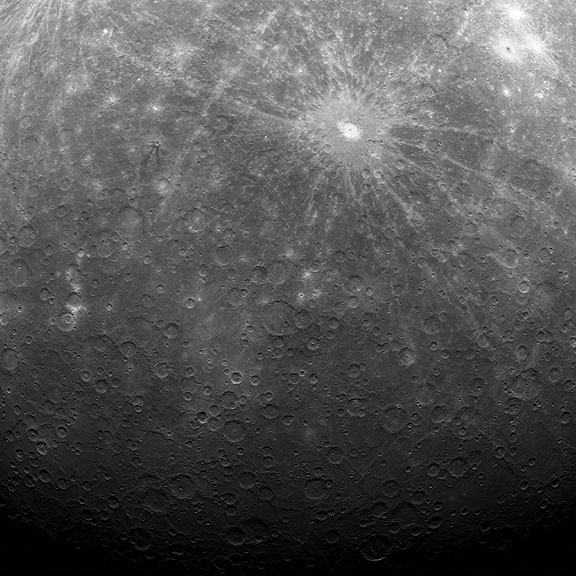 This image is the first ever obtained from a spacecraft in orbit about the Solar System's innermost planet. Over the subsequent six hours, MESSENGER acquired an additional 363 images before downlinking some of the data to Earth. The MESSENGER team is currently looking over the newly returned data, which are still continuing to come down. Tomorrow, March 30, at 2 pm EDT, attend the NASA media telecon to view more images from MESSENGER's first look at Mercury from orbit.

The dominant rayed crater in the upper portion of the image is Debussy. The smaller crater Matabei with its unusual dark rays is visible to the west of Debussy. The bottom portion of this image is near Mercury's south pole and includes a region of Mercury's surface not previously seen by spacecraft. Compare this image to the planned image footprint to see the region of newly imaged terrain, south of Debussy. Over the next three days, MESSENGER will acquire 1185 additional images in support of MDIS commissioning-phase activities. The year-long primary science phase of the mission will begin on April 4, and the orbital observation plan calls for MDIS to acquire more than 75,000 images in support of MESSENGER's science goals.