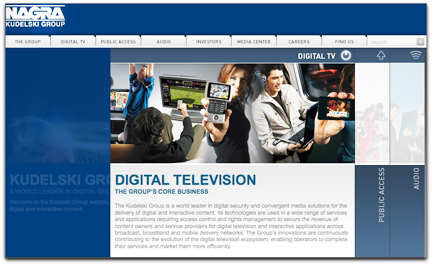 Kudelski Group's website...
The Kudelski Group (SIX: KUD.VX) on March 26th completed the previously announced redemption of the outstanding OpenTV Class A ordinary shares of OpenTV. As a result of the redemption, OpenTV is now fully owned by the Kudelski Group.

The Kudelski Group sees a significant potential in the integration of the teams and product roadmaps of both OpenTV and the Kudelski Group’s digital television division. A unified market vision will allow the Group to align product, solutions, marketing and sales strategies. For customers, this will translate into more flexibility and efficiency. Additionally, employees will benefit from increased career opportunities, as well as cross-organization and international exchanges. The Kudelski Group, last year, initiated a tender offer to acquire all outstanding Class A shares of OpenTV Corp. (NASDAQ: OPTV) not already owned by Kudelski or its subsidiaries. At the end of this transaction, on November 25, 2009, Kudelski owned approximately 96 percent of the voting rights in OpenTV.