[SatNews] Smokey the Bear, a legend in fighting forest fires has competition...  drones that detect forest fires early on.

Researchers at UC Berkeley and Lawrence Berkeley National Laboratory recently developed a system that uses a satellite and drones to detect wildfires at an early stage. 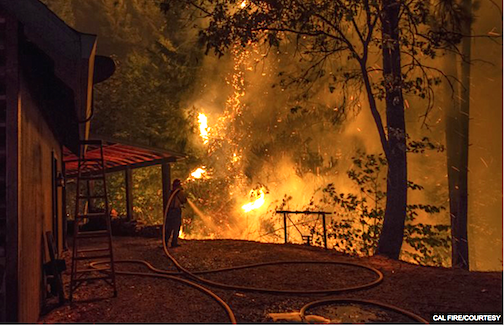 The Fire Urgency Estimation from Geosynchronous Orbit, or FUEGO, is a theoretical framework that uses a satellite to help with the early detection of wildfires. A satellite mounted with megapixel infrared cameras will monitor a patch of land in California 24/7 and relay its data to a geospatial information system on the ground that stores a large database of land use, rainfall, flammability and other factors related to fire urgency.

According to Carl Pennypacker, lead coordinator of the project and an astrophysicist at UC Berkeley’s Space Sciences Laboratory and Lawrence Berkeley National Laboratory, FUEGO is significant because it is a “direct spin of science” that helps people by detecting the fire.

Recently, researchers have moved on to testing drones, which can be deployed close to the ground and provide better image quality, which can be used to run simulation programs that predict where the fire is going, according to Pennypacker.

According to Pennypacker, they are also considering the possibility of using the drones at night when the aerial tankers are not flying, or in mop-up operations to make sure there are no embers left.

Travis Alexander, battalion chief of Cal Fire Tactical Air Operations, agreed that while drones can be helpful, the current problem is the management of air space. According to Federal Aviation Administration’s policy, in the case of a wildfire, a temporary flight restriction will be imposed that prohibits aircraft other than those participating in disaster relief.

Although Cal Fire is granted the use of unmanned aircraft systems or commercial drone operators as a public service entity, it is not looking to employ them until FAA specifies the circumstances, according to Alexander.

Stephen Gage, director of Fire and Aviation Management with U.S. Forest Service, said that the drones could bring fire managers real time data that they may have previously had to wait for due to limited manned aircraft. Current systems, however, have great capabilities with data collection and reporting, Gage said, and fire managers could be overwhelmed with massive influxes of data.

“We will need to develop our fire management on scene organization to handle the data inputs,” Gage said in an email.

John Battles, professor of forest ecology at UC Berkeley, said remote sensing that detects the fire in its early stages can improve suppression, which is especially important in light of the current high risk of wildfire. But regardless of how effective fire detection is, Battles said, there will be some fires that ultimately go out of control.

Maggi Kelly, a team member and professor in the College of Natural Resources, said the team’s next step will be to build a prototype that uses drones and try to find funding for the project. The team is exploring different avenues, including the university advocacy group that works with the state Legislature.

By Tianyi Dong of The Daily Californian