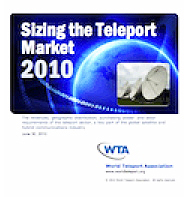 More report info here...
SatNews — The World Teleport Association (WTA) has published the highly anticipated update to its Sizing the Teleport Market study. Published every three years, the 2010 edition of this pioneering study reveals that since its first publication in 2004 the global teleport sector has seen commercial revenue growth of 50 percent (7 percent compound annual growth rate) while the number of teleports operated by commercial and broadcast companies has increased 20 percent to nearly 1,740.

Net revenue (excluding resale of third-party satellite or fiber transmission capacity) has grown even faster than gross or total revenue for commercial operators. Worldwide, commercial operators saw a net revenue growth rate of 9 percent CAGR from 2004 to 2010, compared with 7 percent CAGR for gross revenues. “Teleports continue to grow in importance as a market channel for the world's satellite operators,” said WTA Executive Director Robert Bell. “They are becoming more diverse in their use of transmission technology, mixing satellite with fiber and increasingly with wireless for last-mile services. And they are continually optimizing their ability to use bandwidth to deliver high-value services to customers.”

According to the report, Europe took first place for total commercial revenues in 2010, with North America coming in a close second. The strongest growth from 2004 to 2010, however, took place in Russia and the Newly Independent States (NIS), the Middle East, Latin America and Africa, where emerging market economies are leading the world in overall economic growth. Sizing the Teleport Market 2010 is available free to WTA members from the World Teleport Association Web site. at www.worldteleport.org.