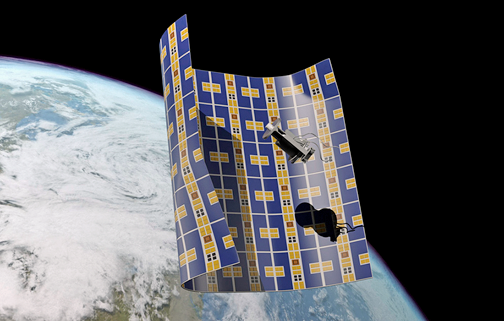 The Brane Craft concept is a flat, 3-foot x 3-foot spacecraft that is less than half the thickness of human hair. Exceptionally light, maneuverable, and fuel-efficient, the funding for this concept will support the next steps to develop an extremely thin spacecraft that would serve as a large piece of high-tech plastic that would wrap around debris and remove it from the Earth’s orbit.

The concept can best be compared to an automated spot cleaner in space, whose mission is limited only by its fuel payload. Last year, the Brane Craft proposal was among 13 concepts that were awarded with the NIAC portfolio of Phase I awards with an overall value of $100,000 for nine months of initial definition and analysis of all proposals. The NIAC brings in researchers and innovators in the scientific and engineering communities, including civil servants.

“It’s great news that Dr. Janson’s Brane Craft proposal has been selected to receive NASA’s Phase II award,” said Steve Isakowitz, Aerospace president and CEO. “Innovation is embedded in the DNA of our employees. I’m thrilled that our company will play a major role in revolutionizing and shaping the future of small satellites and addressing the challenges of Space Situational Awareness.”