A consortium of European television industry leaders has announced the launch of “Hybrid Broadcast Broadband TV” or “HbbTV”, a major new pan-European initiative aimed at harmonizing the broadcast and broadband delivery of news, information, and entertainment to the end consumer through TVs and STBs with an optional web connection. The cross industry consortium includes broadcasters Canal+, France Televisions, and TF1, German research institute Institut für Rundfunktechnik, satellite operator SES ASTRA, as well as the software and media solutions providers ANT and OpenTV. 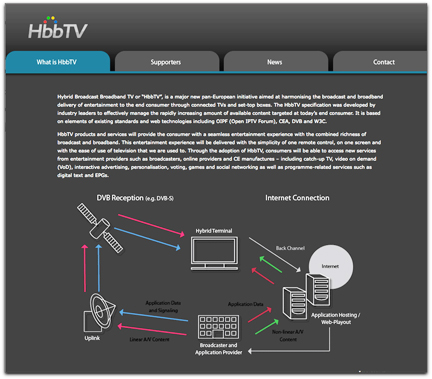 The HbbTV specification was developed by industry leaders to effectively manage the rapidly increasing amount of available content targeted at today’s end consumer. It is based on elements of existing standards and web technologies including OIPF (Open IPTV Forum), CEA, DVB and W3C. HbbTV products and services will provide the consumer with a seamless entertainment experience with the combined richness of broadcast and broadband. This entertainment experience will be delivered with the simplicity of one remote control, on one screen and with the ease of use of television that we are used to. Through the adoption of HbbTV, consumers will be able to access new services from entertainment providers such as broadcasters, online providers and CE manufacturers — including catch-up TV, video on demand (VoD), interactive advertising, personalization, voting, games and social networking, as well as program-related services such as digital text and EPGs. HbbTV products and services will be developed for all broadcasting technologies including satellite, cable and terrestrial networks. The first satellite demonstrations were demonstrated at IFA and IBC 2008.

HbbTV activity in Germany is accelerated by the 2009 launch of HDTV services from broadcasters who are providing high quality HD videotext, interactive program guides and enhanced radio services. HbbTV is also the technology supporting enhanced HD Teletext and HD interactive services from leading private broadcaster groups in the already announced HD+ initiative. External support for HbbTV is also evident in the French market from the HD-Forum. Visitors to the IFA show in Berlin will be able to see demonstrations at the ARD stand (Hall 2.2/101). At IBC2009 in Amsterdam, further examples of HbbTV-based solutions will be showcased at the EBU (European Broadcasting Union) village (stand 10.D21).