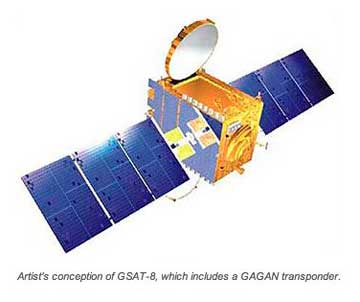 The GSAT-8 multi-mission satellite has been integrated on the Ariane 5 launcher for Arianespace's third flight of 2011. This setup moves the mission campaign into its final preparations for a May 19 liftoff from the Spaceport in French Guiana.

GSAT-8 is now positioned as the lower spacecraft in Ariane 5's dual-payload "stack," clearing the way for installation of the ST-2 satellite as the upper passenger.

The ST-2 satellite was built by Japan's Mitsubishi Electric Company using a DS2000 platform, and will have an estimated liftoff mass of 5,090 kg. Equipped with Ku-band and C-band transponders, ST-2 will provide IP-based fixed and mobile, voice and data transmission satellite services to businesses - especially direct broadcast TV operators and maritime companies in Asia and the Middle East.  It will be operated by ST-2 Satellite Ventures Pte Ltd., a joint venture of Singapore Telecommunications Limited (SingTel) and Chunghwa Telecom Company Limited (Chunghwa).