[SatNews] Optimal Satcom and O3b Networks announced they have entered into a strategic partnership agreement whereby...

...Optimal Satcom will provide enterprise capacity management systems to O3b and its customers. As part of this agreement, Optimal Satcom will enhance its Enterprise Capacity Manager® (ECM) product to model the O3b constellation of high throughput Ka-band satellites in medium-earth orbit (MEO). Because the O3B satellites will operate nearer to the Earth than GEO satellites (approx 8,000 km vs. 36,000 km), the time it takes for signals to travel to the satellite and back (latency) will be significantly reduced. This low latency will allow O3b to be used by applications previously not well supported by satellite, such as telcos, ISPs and mobile/wireless network operators. At the same time, traditional satellite operators will be able to leverage the unique value proposition of the O3b network to augment their service offerings. O3B plans to launch its first eight (8) Ka-band satellites in the first half of 2013. It will launch another four (4) spacecraft by the end of 2014, providing global broadband coverage to emerging markets in an area between 45 degrees north and 45 degrees south latitude. 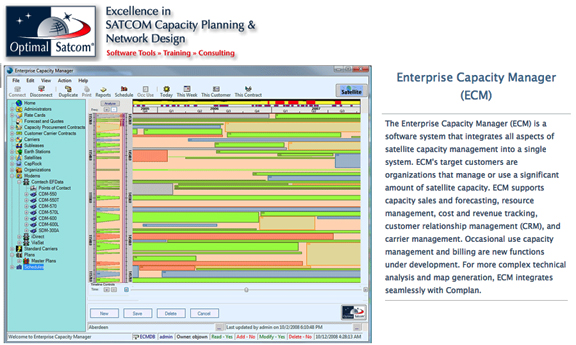 As part of this project Optimal Satcom will provide O3b with an enterprise capacity management system for its internal use, integrate it with O3b’s other operational and business systems, and provide associated training and support services. In parallel, Optimal Satcom will develop an enhanced set of tools for use by O3b’s customers, including a special ECM O3b module for service providers. Both systems are expected to be ready well before O3b commences commercial operation in 2013.