A smallsat to be constructed as part of the project will feature a Finnish platform and radio transmitter. As the number of satellites and the speed required for data communications increase, transition to higher frequencies will become a necessity in the near future. Funded by the European Space Agency (ESA) as part of its ARTES program, this activity will demonstrate the use of the 75 GHz frequency band for future telecommunications satellites. The test flight will be carried out using a cost-effective cubesat. The Finnish-made satellite weighs less than 5 kg., and its launch into space is scheduled to occur during 2019. 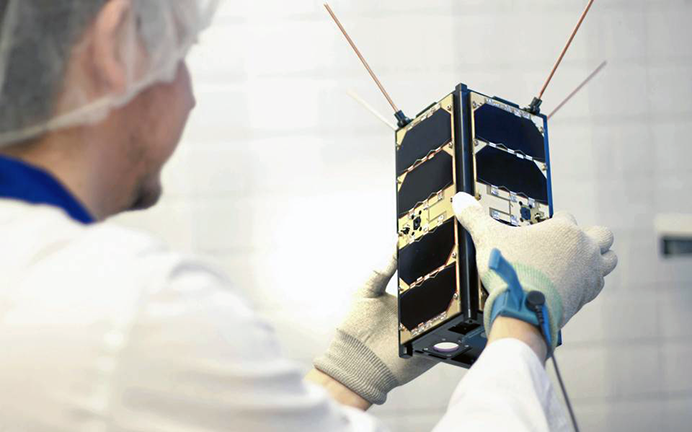 Photo is courtesy of Reactor.

The satellite's mission is to send, for the first time in history, this high-frequency signal from space to Earth. The transmission of the signal through the atmospheric layers must be substantiated before telecommunications satellites that use the new frequency band can be designed with the desired features. The satellite to be built for the project is based on Reaktor Space Lab’s "Hello World" satellite platform, which will be launched on its first mission this summer.

The satellite, named W-Cube, will feature an integrated dual-frequency beacon transmitter developed by VTT. The signal it broadcasts will be observed at the prime contractor JOANNEUM RESEARCH’s measurement station in Graz, Austria. In recent years, dozens of projects have been launched for new telecommunications satellites and constellation consisting of hundreds, if not thousands, of satellites. These include OneWeb and SpaceX’s Starlink. Satellites enable the provision of high-speed communications for sparsely populated areas, aircraft and ships.

As the number of satellites and telecommunications speeds increase, the spectrum of electromagnetic radiation becomes congested and the transition to higher frequencies will become a necessity in the near future. The next generation of 5G communication networks will also use increasingly high frequencies, largely for the same reason.

Reaktor Space Lab's CEO Tuomas Tikka noted that being selected by ESA to take part in this innovative project reflects the importance of the nanosatellite technology recently developed in Finland.

Tauno Vähä-Heikkilä, Vice President at VTT said that VTT has led the way in the millimeter-wave satellite hardware development and in terrestrial 5G telecommunications radios. The W-Cube nanosatellite provides a unique opportunity to combine their world class expertise in these two application areas.