NASA's Cassini spacecraft has photographed a flash of sunlight reflecting from a lake on Saturn's moon, Titan, confirming the presence of liquid hydrocarbons on a part of the moon dotted with many lake-shaped basins. Cassini scientists had been looking for the glint, also known as a specular reflection, since the spacecraft began orbiting Saturn in 2004.

However, until recently, Titan's northern hemisphere, where most of the lakes are located, had been veiled in winter darkness. Now the seasons are changing and sunlight has returned to the north, allowing Cassini to capture this serendipitous image... 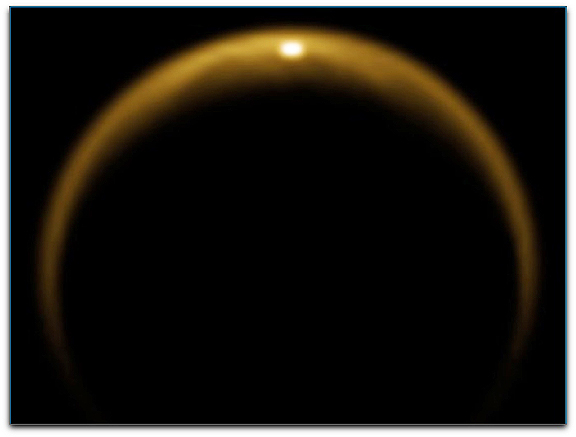 The picture, which shows sunlight reflecting from the smooth surface of a liquid on July 8, 2009, was presented at the Fall meeting of the American Geophysical Union in San Francisco. "This one image communicates so much about Titan -- a thick atmosphere, surface lakes and an otherworldliness," says Bob Pappalardo, Cassini project scientist, based at NASA's Jet Propulsion Laboratory. "It's an unsettling combination of strangeness yet similarity to Earth. This picture is one of Cassini's iconic images." (Credit: Science@NASA)