[SatNews] ... to ensure construction of a vehicle that will enable the powerful telescope and science instruments to deliver astonishing views of the universe.

Northrop Grumman Corporation (NYSE: NOC) successfully passed the last significant mission design milestone for NASA's James Webb Space Telescope, the spacecraft Critical Design Review (CDR), five months ahead of schedule, following the replan. The spacecraft provides the power and communications for the whole observatory and is responsible for pointing the telescope and image stabilization. Northrop Grumman is under contract to NASA's Goddard Space Flight Center in Greenbelt, Maryland, for the design and development of the Webb Telescope's optics, sunshield and spacecraft. 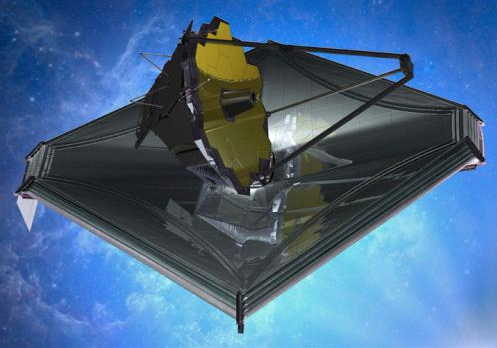 An independent panel of experts conducted a rigorous, weeklong review of the detailed design, construction and testing plans, and flight software for the Webb Telescope's spacecraft. The CDR included extensive discussions on all aspects of the spacecraft to ensure construction of a vehicle that will enable the powerful telescope and science instruments to deliver astonishing views of the universe. The team successfully completed more than 76 preceding reviews on the spacecraft subsystems to prepare for this CDR.

"Our Northrop Grumman team did an incredibly thorough job preparing for this design review and demonstrated impressive knowledge of Webb's subsystems," said Andy Cohen, Webb spacecraft manager, Northrop Grumman Aerospace Systems. "I am exceptionally proud of how hard this team worked to meet this important mission milestone on an accelerated schedule."

NASA's James Webb Space Telescope is made up of three major components; the telescope, the tennis-court sized sunshield, and the spacecraft. The sunshield separates the observatory into a warm sun-facing side and a cold anti-sun side to protect the telescope optics, or mirrors, from the sun and Earth's heat. The warm side below the sunshield is the spacecraft side. The spacecraft provides power, pointing capability and fuel for station keeping.

The completed mirrors arrived at NASA's Goddard Space Flight Center in December 2013, and production of the final flight sunshield layers is currently underway. The spacecraft CDR was the last major design to complete, marking significant progress toward completion of the Webb Telescope. Following this successful review, manufacturing of the various parts that make up the spacecraft such as the fuel tanks, gryoscopes and solar panels will continue.

The James Webb Space Telescope is the world's next-generation space observatory and successor to the Hubble Space Telescope. The most powerful space telescope ever built, the Webb Telescope will observe the most distant objects in the universe, provide images of the first galaxies formed and see unexplored planets around distant stars. The Webb Telescope is a joint project of NASA, the European Space Agency and the Canadian Space Agency.