[SatNews] Everyone wants our kids to be healthy, and when they're not sometimes others go the extra step, such as...

Mr. Wissam Al Jayyoussi has now completed yet another challenging leg of his 60,000 kilometer “Goodwill Journey” after safely reaching Chelyabinsk, Russia, the 15th stop on his 22-country voyage. He travels alone along the historic Silk Route from the Middle East to Southeast Asia by motorbike.

Wissam, a Jordanian national with Palestinian roots, embarked on this inspirational quest to create awareness and raise funds for the first freestanding pediatric cancer center in Palestine. As he faces several precarious and remote areas, Mr. Al Jayyoussi has been relying on communications equipment provided by Thuraya Telecommunications Company. 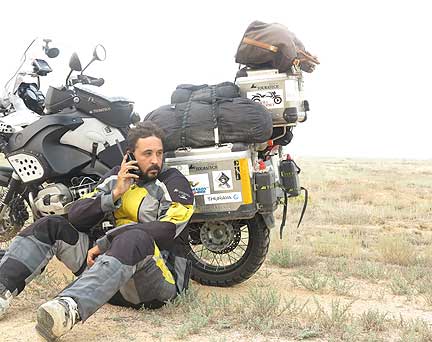 ..."Thuraya XT has proven to be tougher than me and my motorbike!”

Proceeds from the extraordinary “Goodwill Journey” charity project will be used to purchase much needed medical equipment for the Palestinian Children's Relief Fund Pediatric Cancer Center in the West Bank. The sophisticated satellite communications equipment provided by Thuraya is enabling Mr. Al Jayyoussi to stay in contact with his sponsors and his Dubai-based team as well as to upload photos, videos and other material from the epic journey. Al Jayyoussi expects to complete the monumental trip in approximately 132 days.

“I am thrilled to be sharing the experience with all those who are supporting me and closely following the ‘Goodwill Journey’. The success of this campaign depends largely on the support of our key sponsors as well as the individual benefactors who genuinely believe in our cause,” said Al Jayyoussi.

“Thuraya is committed to serving humanity. We are delighted to be supporting Mr. Al Jayyoussi on his inspirational project,” says Samer Halawi, Thuraya’s Chief Executive Officer.

Among the equipment provided by Thuraya is the innovative and durable Thuraya XT handset which Wissam has been using to make phone calls and for online tracking. The device has already shown its value to Wissam’s journey. As he was driving through the mountains of Baluchistan in Pakistan, the Thuraya XT fell off his motorbike. Several miles later, Wissam realized he was missing his Thuraya. Luckily, he had the last coordinates from it, which later helped the Police locate it. When found two days later, true to its highly robust nature, the phone was still on!

On another occasion, Wissam had a minor accident where he suffered a fall. Wissam reported, “I fell off my bike, sustained injuries to my ribs and the bike was also damaged. But, yet again, the phone was still on and working! Thuraya XT has proven to be tougher than me and my motorbike!”

“As a global satellite telecommunications operator, Thuraya is dedicated to delivering clear and reliable communications services that empower the citizens of the world and provide them with the means to go far in their quest for happiness and social balance, while remaining safe in the knowledge that they are at all times connected,” added Thuraya’s Chief Executive Officer, Mr. Samer Halawi.