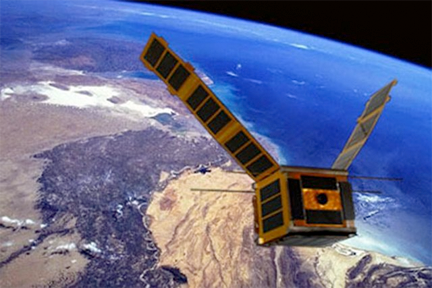 [SatNews] The Ecuadorian Civil Space Company, or EXA, has captured the first images of South America that were captured and forwarded to Earth by the country's Krysaor satellite, which also managed to recover the audio signal from another device —the Pegaso—which was launched nine months ago and was considered lost after crashing into some space debris last August.

"The signal is stable," the Ecuadorian astronaut and director of EXA, Ronnie Nader, announced from the Samborondon space station near the city of Guayaquil in southeastern Ecuador.

The first images captured were of the coastal areas of Colombia, Ecuador and Peru, sent by the nanosatellite Krysaor from an altitude of 750 kilometers (465 miles), Nader said.

EXA launched Krysaor on November 21st from the Dombvarovski missile area at the Russian base of Yasni aboard the rocket Dneper Rs20b, which carried satellites from other countries as well. This second Ecuadorian nanosatellite—similar to Pegaso, a cube weighing 2.1 kilos (4 2/3 pounds) that was launched last April from China - was equipped with a device to try and catch the signal from the first one, which had been sideswiped by debris from an old Russian rocket that sent it spinning on its axis at high speed. Despite EXA's efforts, Pegaso's signal could never be recovered until Saturday, when Krysaor managed to connect with it and pick up its audio signal.

"We have recovered Pegaso," said Nader, who, during the television broadcast of the Krysaor operation to capture the signal, spoke with the president of his country, Rafael Correa. "We saw the coast of our America, of our Great Homeland, very clearly," Correa told Nader.

In the construction of the Ecuadorian nanosatellite Pegaso, which took a year, and its twin Krysaor, EXA, several private companies invested some $80,000, while the government contributed around $700,000 for the launch, insurance, logistics and certification tests for both satellites.