U.S. Department of Defense... Monitoring The Fall Of UARS (Satellite) 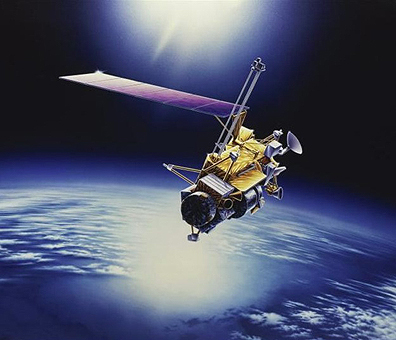 Upper Atmosphere Research Satellite (UARS)
[SatNews] As a 6.5-ton NASA satellite makes its way back to Earth later this week, an Air Force space operations team in California is tracking its every move...

The team is expected to predict when — and possibly where -- that satellite (Upper Atmosphere Research Satellite (UARS)) will re-enter the atmosphere. The Joint Space Operations Center, part of the Joint Functional Component Command for Space at Vandenberg Air Force Base, is responsible for tracking the 22,000 objects — mostly space junk — that orbit Earth. The center, which reports to U.S. Strategic Command, also maintains “space situational awareness” in support of national security, said Jeremy Eggers, public affairs director for the operations center.
,br /> As part of that mission, the center is gathering tracking data to help NASA officials analyze the satellite and its movements. NASA launched the upper-atmosphere research satellite in the early 1990s, but decommissioned it in 2005. he projected re-entry is tomorrow (Friday) afternoon, but many factors can affect the actual time, Eggers said. For example, a solar storm altered the first projected re-entry date, Sept. 26. “The operations center has a lot of sensors looking at the …satellite,” he said. “As it re-enters the Earth’s atmosphere, the data will become more and more refined.” 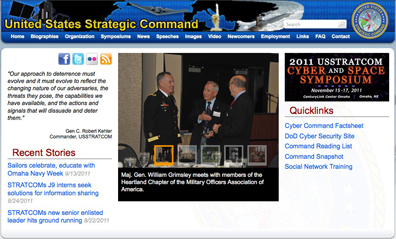 U.S. Strategic Command homepage
If the satellite doesn’t incinerate when it enters Earth’s atmosphere, NASA officials expect to see 25 or 26 pieces of debris from the craft. The biggest piece is estimated to weigh 300 pounds. No model exists to analyze or predict where the debris will fall, because there’s no way to predict how the object will break up upon re-entry, Eggers said. To get the best possible assessment, the Joint Space Operations Center started issuing reports to NASA four days before the expected re-entry, reporting more regularly as the satellite gets closer to Earth. “The center will advise NASA when the satellite is two hours out from re-entering the Earth’s atmosphere, give or take 15 minutes,” said Air Force Maj. Michael Duncan, deputy chief of space situational awareness at the center. “That 15 minutes,” he added, “could mean the difference of 7,000 miles [in distance] and where it penetrates the Earth’s atmosphere.”

As of yesterday, Duncan said, the satellite was orbiting the Earth every 90 minutes at more than 17,000 miles per hour. It was hovering “at 120 miles away, and dropping,” he said. Satellites re-enter the Earth’s atmosphere routinely, Duncan said, but this craft garnered worldwide attention because it’s described as the size of a bus. “Something of this size happens about once every year,” he said. “But about once a week we have an object that’s usually a rocket body or something larger that’s re-entering the Earth.” It’s highly unlikely that the satellite will cause personal injury, Eggers said.

“It’s important to note that 70 percent of the Earth is covered with water, and of the land on Earth, only about 70 percent of that is inhabited,” he said. He noted that in 50 years of the U.S. space program, there is no documentation of debris falling from space striking anyone or causing any significant damage. After the re-entry is complete, the operations center will continue its mission of tracking and observing the 22,000 objects in space, Eggers said. “The space situational awareness plays an important role in protecting U.S. space-based assets,” he said.