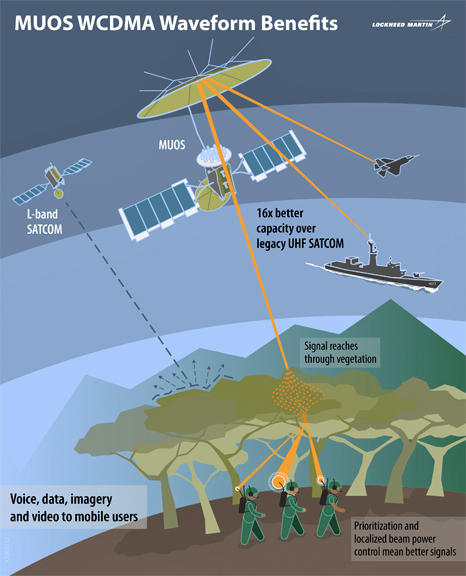 A team from Harris recently used the lab to connect the AN/PRC-117G Falcon III radio to MUOS systems developed by Lockheed Martin [NYSE: LMT]. It’s one of several terminals that are well under way in testing their connections with the constellation. Many terminals—from hand-held radios to satellite links on ships, planes and ground vehicles—can easily integrate this new type of signal, and Lockheed Martin’s facility helps developers test those connections. While some terminals are new products, the lab also helps existing terminals connect. Enabling access for radios in inventory means more users can use MUOS without the cost of all new gear.

“MUOS provides a leap in capability that can save lives and improve missions, so naturally we want as many users to connect as possible,” said Dave Helseth, Lockheed Martin director of Systems Engineering, Integration and Test for MUOS. “Over 55,000 currently fielded terminals could be upgraded for full MUOS capability as early as 2016. Our simulation lab helps providers quickly complete their integration work and move forward with government certification.”