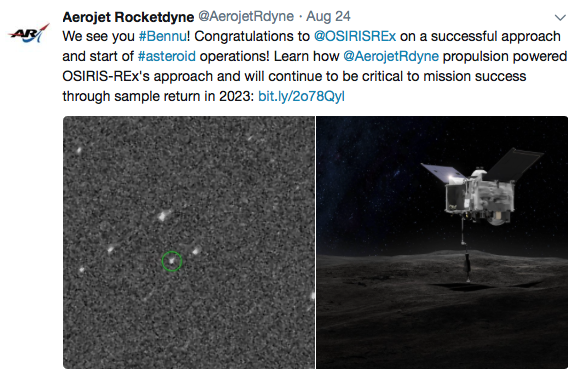 A company builds 28 rocket engines that are to maneuver a spacecraft that will descend onto an asteroid to take samples and then return to Earth. This isn't the script for an upcoming sci-fi movie...

it's what is already taking place and the major players are Aerojet Rocketdyne's delta-v thrusters to steer NASA's OSIRIS-REx around asteroid Bennu for more than a year surveying and mapping before descending to the surface to take a sample, and then accelerating the spacecraft back to Earth for its return.

OSIRIS-REx will perform a series of braking maneuvers to modify the spacecraft’s velocity and trajectory, slowing down more than 1,000 mph to match Bennu’s velocity and enable a safe arrival and matching orbits with the asteroid. After arrival, OSIRIS-REx will transition into its surveying and mapping phase, in which it will maneuver around the circumference of the asteroid for more than a year. The surveying will help identify a site at which OSIRIS-REx will eventually collect a sample of Bennu’s surface to return to Earth for study.

Powered by Aerojet Rocketdyne propulsion, OSIRIS-REx’s long-awaited approach of Asteroid Bennu has officially begun. The 28 propulsion devices on the spacecraft include four MR-107S 50-lbf thrusters, six MR-106L 5-lbf thrusters, 16 MR-111G 1-lbf thrusters and two MR-401 0.1-lbf thrusters. With the asteroid now in sight, the spacecraft’s onboard thrusters will begin to conduct a number of approach maneuvers to match Bennu’s orbital velocity to prepare for arrival on December 3. 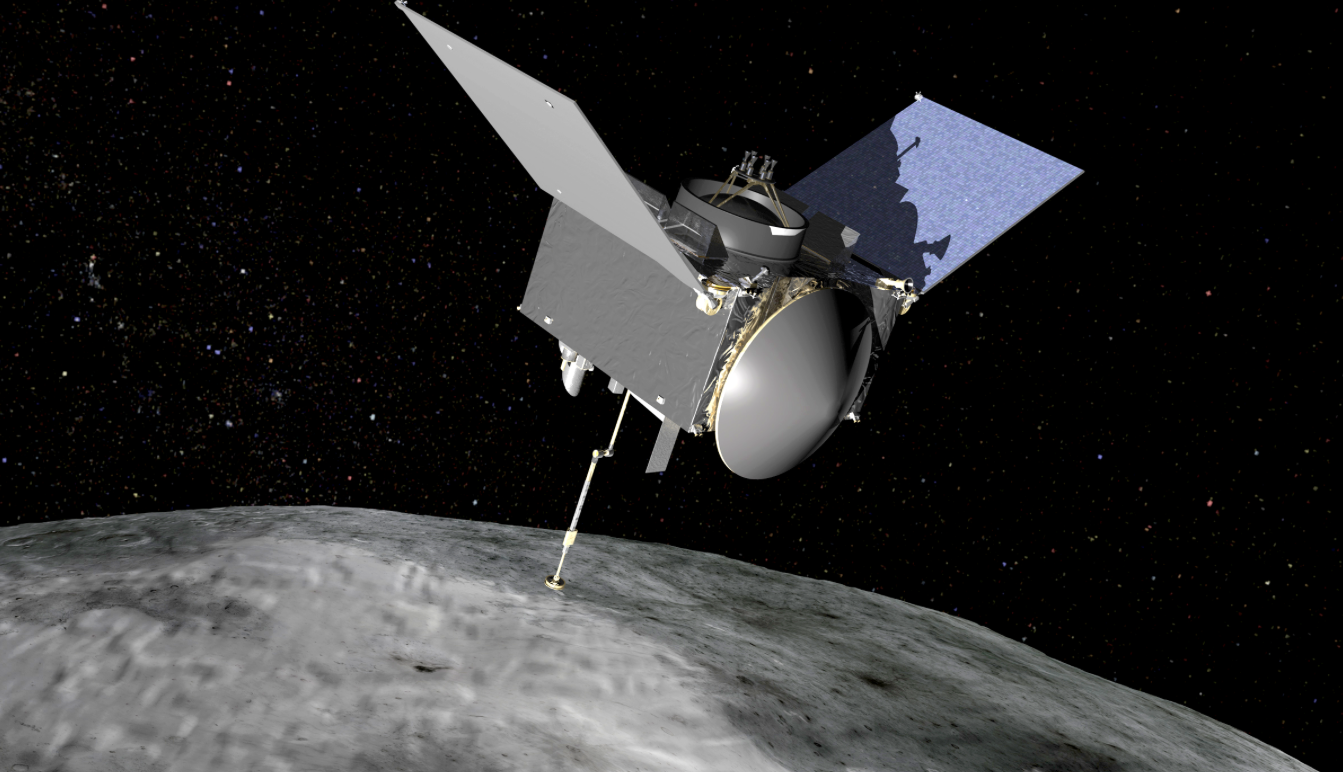 To obtain the asteroid sample, Aerojet Rocketdyne thrusters will maneuver the spacecraft down to make contact with the surface of Bennu and then a burst of nitrogen gas will be used to blow regolith particles into the sampler head. Up to 2 kg of regolith will be captured and then Aerojet Rocketdyne thrusters will maneuver OSIRIS-REx up and away from the surface.

Aerojet Rocketdyne CEO and President Eileen Drake said that from the 2016 launch from Cape Canaveral to the safe return of the sample to Earth in 2023, Aerojet Rocketdyne propulsion plays a critical role in every phase of the OSIRIS-REx mission.

The return phase of the mission requires the firing of the MR-107 thrusters to depart Bennu at a speed of 716 mph, placing OSIRIS-REx on a trajectory that intersects the orbit of the Earth in September 2023. The final maneuver will involve steering the spacecraft away from Earth after the sample re-entry capsule has been jettisoned, and placing the spacecraft into a stable orbit around the sun.

In addition to the critical in-space propulsion provided to the spacecraft, Aerojet Rocketdyne’s contribution to the OSIRIS-REx mission extended to the launch vehicle’s main and second stages as well. The mission launched on September 8, 2016 from Cape Canaveral, Florida on a United Launch Alliance Atlas V rocket. One AJ-60A solid rocket booster provided additional thrust to the main stage; a single RL10A upper stage engine helped place the payload on its path toward the asteroid; and a dozen reaction control thrusters on the Centaur upper stage provided roll, pitch and yaw control.