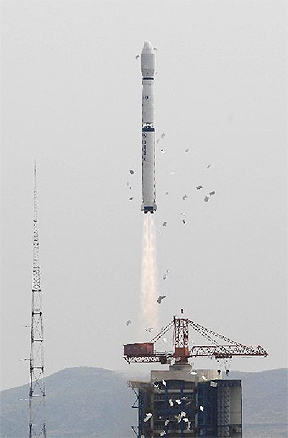 ..., AKA Yaogan XIIII , Thursday from Taiyuan Satellite Launch Center in the northern province of Shanxi, according to a press release from the center. The satellite was carried into space aboard a Long March 4B carrier rocket,which blasted off at 3:06 p.m. Beijing time, according to the center. The satellite will be used to conduct scientific experiments, carry out surveys on land resources, monitor crop yields and help with natural disaster-reduction and prevention.

The Long March 4B carrier rocket was produced by China Aerospace Science and Technology Corporation. Thursday's launch is the 162nd mission of Long-March-series carrier rockets. Along with Yaogan XIIII, a tiny satellite named Tiantuo I was also sent into orbit during the flight. The satellite, weighing only 9.3 kg, will be mainly used for data reception for the satellite-based vessel Automatic Identification System, optical imaging and various space exploration experiments in orbit. (Source: Xinhuanet.com)