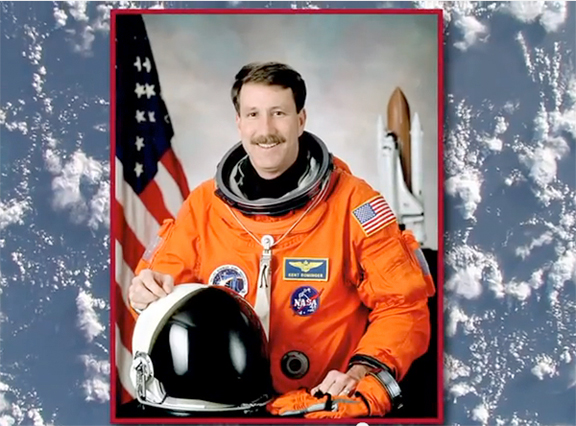 Kent Rominger, vice president of Strategy and Business Development for Orbital ATK's Propulsion Systems Division, was inducted into the Astronaut Hall of Fame on May 30, 2015.

Photo is courtesy of USNA.

[SatNews] Orbital ATK (NYSE: OA) has announced that Kent Rominger, Vice President of Strategy and Business Development for the company’s Propulsion Systems Division, has received the honor of being inducted into the U.S. Astronaut Hall of Fame.

Rominger was selected by NASA to become an astronaut in 1992. A veteran of five spaceflights—three as pilot and two as commander—he logged more than 1,600 hours and traveled nearly 27 million miles in space. Several of Rominger’s missions were integral to the start of the International Space Station. As commander of STS-96, Rominger oversaw the first docking of a space shuttle to the space station. He culminated his NASA career as Chief of the Astronaut Office.

“Becoming a member of the Astronaut Hall of Fame is a tremendous honor,” said Ron Grabe, a veteran astronaut of four space flights and President of Orbital ATK’s Flight Systems Group. “On behalf my colleagues at Orbital ATK, I congratulate Kent on his induction.”

Charlie Precourt, previous Astronaut Hall of Fame inductee and Vice President and General Manager of Orbital ATK’s Propulsion Systems Division, added his congratulations: “The attributes and skills Rominger developed as a shuttle commander and as Chief of the Astronaut Office make him a strong and valued leader at Orbital ATK. We are all proud of his achievements leading up to this honor.”

Rominger joined Orbital ATK in 2006 and has served in various senior leadership capacities, including Vice President of Test and Research Operations and Vice President of Advanced Programs. He also had a distinguished 26-year career as fighter pilot with the U.S. Navy before joining the astronaut corps.

“The original Mercury astronauts who started the Astronaut Hall of Fame were all my childhood heroes,” Rominger said. “I’m incredibly honored to be inducted into the Hall of Fame and become part of that distinguished crowd.”