A Moving Experience For Airbus Defence & Space's Skynet 5A Satellite 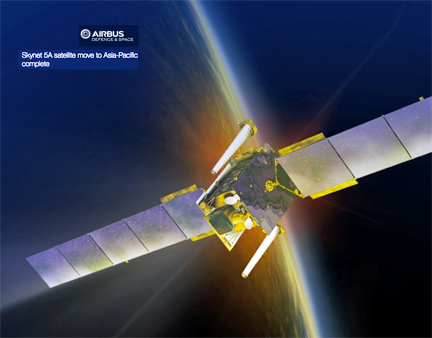 [SatNews] Airbus Defence and Space announces the successful completion of the 67,000 km move of the Skynet 5A satellite from 6 degrees East to 95 degrees East.

Skynet 5A is now optimally located to provide protected and secure military satellite communications (MILSATCOM) services to allied governments in the Asia-Pacific region.

Airbus Defence and Space started the move of the Skynet 5A military communications satellite on June 17, 2015. The relocation was initiated to extend the Skynet constellation’s coverage and services from 178 West to 163 East, including the Indian Ocean and Western Pacific region. With the move now complete, the Skynet network now offers near-global military X-band and UHF coverage, expanding core service reach for the UK military and augmenting coalition capabilities in the region.

Airbus Defence and Space owns and operates the hardened Skynet X-band satellite constellation of eight satellites and the ground network to provide all Beyond Line Of Sight (BLOS) communications to the UK Ministry of Defence. The contract also allows other NATO and allied governments such as members of the five-eyes community (besides UK, the USA, Australia, New Zealand and Canada) to use the Skynet system to augment their existing services. Airbus Defence and Space also leases the X-band hosted payload on Telesat’s Anik G1 satellite which covers the Americas and parts of the Pacific including Hawaii and Easter Island.