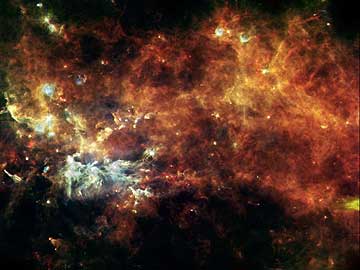 Image credit: ESA/Hi-GAL Consortium
Last week Satnews celebrated the anniversary of the launch of the two jewels of high technology, considered the most complex satellites ever produced in Europe, they were both developed and built by an industrial team led by Thales Alenia Space under the largest contract ever awarded by the European Space Agency for a science mission.

The two spacecraft were successfully released on a trajectory that led them to enter orbit around the L2 stability point, some 1.5 million kilometers from Earth in the opposite direction from the Sun. This unique venture point provides the two observatories with round-the-clock observation capabilities far from the thermal and lightning disturbances existing in the vicinity of our planet.

Since they’ve reached their operational orbit and completed their commissioning, Herschel and Planck have been providing a flow of data of tremendous quality to the science community. Scientists are now eager to reveal their findings based on what is only the first season of an unprecedented vision of our Universe.

Today photos provided a sample of the data returned from these two spacecraft. Entitled the Assembly Line of Stars, the constellation Vulpecula is a veritable entire assembly line of newborn stars. The diffuse glow reveals the widespread cold reservoir of raw material that our Milky Way galaxy has in stock for building stars.

Large-scale turbulence from the giant colliding galactic flows causes this material to condense into the web of filaments seen in this image. As the stellar material becomes colder and denser, gravitational forces take over and fragment these filaments into chains of stellar embryos that can finally collapse to form baby stars.

Presented on May 6, 2010, during a major scientific symposium held at ESA, the results challenge old ideas of star birth, and open new roads for future research.

Herschel’s observation of the star-forming cloud RCW 120 also revealed an embryonic star which may become one of the biggest and brightest stars in our galaxy within the next few hundred thousand years. The star already contains eight to ten times the mass of our sun and is still surrounded by an additional 2,000 solar masses of gas and dust from which it can feed.

More on the new results and images from ESA's Herschel, visit.