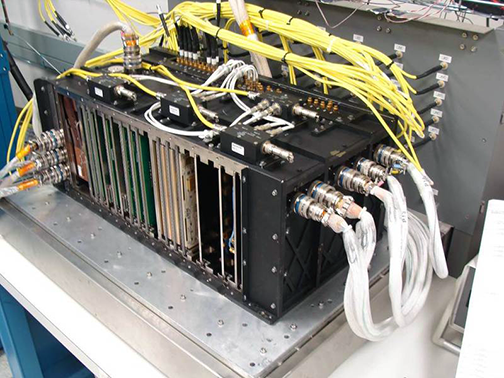 The advanced MDU on navigation payloads delivered for the
GPS III satellites.

Photo is courtesy of the manufacturer, Harris Corporation.

Harris is committed to delivering a seventh navigation payload by the end of 2018. This latest payload delivery is the third payload Lockheed Martin has received in the last 12 months.

Harris navigation payloads are already integrated on five GPS III satellites. In August, the first GPS III space vehicle (GPS III SV01) shipped to Florida for an expected December launch. Also, in August, the Air Force declared GPS III SV02 Available for Launch, or “AFL,” for an expected 2019 launch. GPS III SV03 and SV04 are fully assembled and in environmental testing. GPS III SV05 was integrated with its payload this fall and will begin system testing later this year.

In 2017, Harris announced that it completed development of an even more-powerful, fully digital MDU for the Air Force’s GPS III Follow On (GPS IIIF) program. The new GPS IIIF payload design will further enhance the satellite’s capabilities and performance. In September, after a full and open competition, the Air Force awarded Lockheed Martin a contract for up to 22 additional GPS IIIF satellites.

Harris’ expertise in creating and sending GPS signals extends back to the mid-1970s – providing navigation technology for every U.S. GPS satellite ever launched. While the Air Force originally developed GPS for warfighters, millions of people around the world and billions of dollars of commerce now depend on the accurate, reliable signal created and sent by Harris navigation technology.