The next NEXT satellite launch could occur on January 8, as SpaceX has fueled and nestled ten Iridium voice and data relay satellites within a Falcon 9 rocket's fairing. 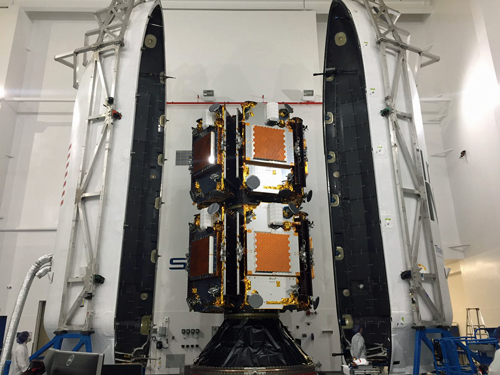 The first ten Iridium NEXT satellites are stacked and encapsulated in the Falcon 9 fairing for launch from Vandenberg Air Force Base, California.

Photo is courtesy of Iridium.

This news was offered on December 29 by Iridium's communications division, with that company's CEO, Matt Desch, offering a tweet on December 25 that the launch would occur "very soon." This is good news for SpaceX, which remains on the mend from the September 1 test fueling failure that totally destroyed a Falcon 9 rocket and the resident satellite payload. This event is still awaiting an FAA approval for SpaceX to return to flight, as of this writing. The launch will occur from Vandenberg Air Force Base in California.

Gwynne Shotwell, the President of SpaceX, stated that the company is looking forward to this return to flight, adding that Iridium has been a great partner for almost ten years and SpaceX appreciates that company working so diligently with them to place their first 10 NEXT satellites into orbit.

The plan by Iridium is to engage in seven Falcon 9 launches. Each launch will insert ten IridiumNEXT satellites into orbit, with 70 LEO satellites to complete the constellation that is scheduled to be on orbit by early 2018. The company's Iridium CertusSM multi-service comms platform will drive higher throughputs and faster speeds and is reliant upon  successful, constellation implementation.