[SatNews] Representatives from the transport communities of the Euromed region met in Amman, Jordan, at an event organized by MEDUSA under the auspices of the Ministry of Transport of Jordan. 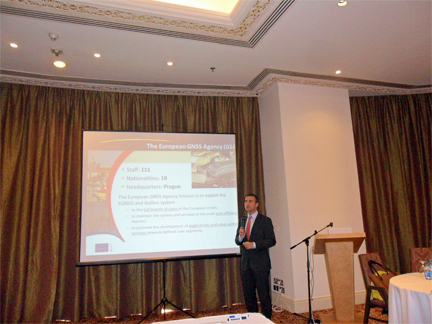 The event was aimed at presenting the results of the activity carried out by MEDUSA in relation to the use of satellite navigation for freight transport. Since April 2014, and supported by the European companies involved in MEDUSA, Jordanian Customs has been concretely proving and validating the use of EGNOS in real cases, to track and trace intermodal containers shipped across the Mediterranean sea and to monitor the movement of vehicles transporting goods in Jordan. As EGNOS is operational, this is the true experience of EGNOS services usage in the most distant areas from Europe.

An institutional panel, including representatives of the Jordan Ministry of Transport, the European Delegation to Jordan and the European GNSS Agency, opened the event in Amman. The participants from the institutions and main stakeholders of the Euromed countries, capitalizing on the Jordanian experience, discussed the opportunities offered by the use of satellite navigation services in the freight transport and road domains, shared interests and strategies in a national and regional perspective, learned about similar European experiences and related success stories. This event in Amman follows a similar one held in Tunis last June, which was focused on aviation. As happened in Tunis, the Euromed countries reiterated their interest towards the E-GNSS, confirming that EGNOS today and Galileo in the future can provide benefits to European countries as well as to countries outside Europe, particularly to those of the Euromed region already benefiting from early EGNOS services.

Overall, MEDUSA is continuing to play its crucial role of helping the countries in North Africa and in the Middle East to use E-GNSS services and to bring them close to the operational adoption of EGNOS and in view of Galileo.

Coordinated by Telespazio, the MEDUSA project belongs to the Euromed GNSS framework, part of the Euromed Transport program. MEDUSA aids the Euromed countries towards the operational introduction and the exploitation of the European GNSS (EGNOS/Galileo) in various applications, mainly in the transport sectors.