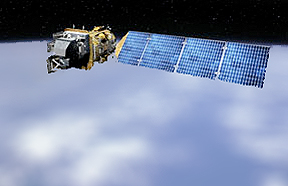 ...to launch February 11th from Vandenberg Air Force Base in California. A joint NASA and U.S. Geological Survey (USGS) mission, LDCM will add to the longest continuous data record of Earth's surface as viewed from space. LDCM is the eighth satellite in the Landsat series, which began in 1972. The mission will extend more than 40 years of global land observations that are critical in many areas, such as energy and water management, forest monitoring, human and environmental health, urban planning, disaster recovery and agriculture. NASA and the USGS jointly manage the Landsat Program.

The LDCM will provide moderate-resolution measurements of Earth's terrestrial and polar regions in the visible, near-infrared, short wave infrared, and thermal infrared. There are two instruments on the spacecraft, the Thermal InfraRed Sensor (TIRS) and the Operational Land Imager (OLI). LDCM will provide continuity with the nearly 40-year long Landsat land imaging data set, enabling people to study many aspects of our planet and to evaluate the dynamic changes caused by both natural processes and human practices.

After launch, LDCM will enter a polar orbit, circling Earth about 14 times daily from an altitude of 438 miles (705 kilometers), returning over each location on Earth every 16 days. After launch and the initial checkout phase, the USGS will take operational control of the satellite, and LDCM will be renamed Landsat 8. Data will be downlinked to three ground stations in Gilmore Creek, Alaska; Svalbard, Norway; and Sioux Falls, S.D. The data will be archived and distributed at no cost to users from the USGS's Earth Resources Observation and Science Center in Sioux Falls.