The ArianeWorks Acceleration Platform is Launched by ArianeGroup and CNES

ArianeGroup CEO André-Hubert Roussel and CNES President Jean-Yves Le Gall have signed a memorandum of understanding (MoU) to create an acceleration platform dedicated to the preparation of future launchers.

To be called ArianeWorks, the new platform will boost innovation for future launcher development by bringing teams together under one roof and connecting them to Europe’s space ecosystem. 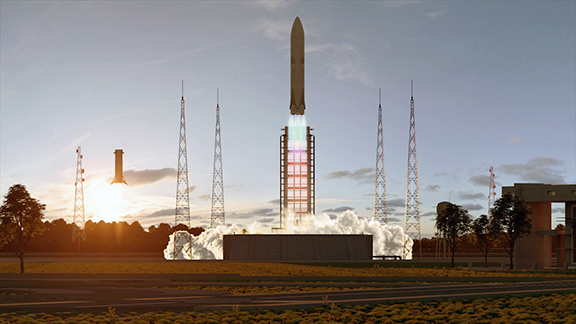 Artistic rendition of Themis is courtesy of ArianeGroup.

Both longstanding stakeholders in the Ariane series, ArianeGroup and CNES are currently developing Ariane 6 for ESA. Since 2015, they have been working together to conceive the Prometheus rocket engine, prior to ESA’s successful tabling of the related program at its 2016 Ministerial Conference. Prometheus is currently under development, with the first prototype due to be tested in two years. CNES and ArianeGroup are also working together on the development of Callisto — a reusable first stage demonstrator — alongside DLR and JAXA.

With a view to boosting future launcher preparation, CNES and ArianeGroup have opted for a step change by creating a new kind of partnership where teams work together in a highly flexible environment, open to new players and internationally, with the key goal of accelerating the Ariane Next roadmap and in particular its first phase, the Themis demonstrator. ArianeWorks is being created in the lead up to the 2019 Ministerial Conference and its results will be made available to ESA.

In this era of NewSpace and in the context of fierce competition, ArianeWorks will accelerate innovation at grassroots level, in favor of mid-tier firms and start-ups, with commitment to reducing costs a major priority. The goal is to work together closely through this first phase up to April 2020 by inspiring and involving new players, not least pioneering start-ups, laboratories, SMEs and manufacturers. ArianeWorks will also act as a pathfinder, able to accurately assess the technological context in order to make the right choices within the shortest timescales. This calls for an approach resolutely geared towards open innovation, to encourage the exchange of expertise and spawn a ground-breaking new ecosystem.

A video detailing the ArianeWorks—Themis project is available at this direct link...

CNES President Jean-Yves Le Gall said Ariane is one of Europe’s greatest technological, industrial and commercial success stories, and the company must pursue that success in the face of strong international competition. The role of ArianeWorks is to prepare, at the French level, the proposals for future launchers to be presented at Europe’s next Ministerial Conference. These include, in particular, the roadmap for Ariane Next and for its first phase, the Themis demonstrator.

André-Hubert Roussel added that ArianeWorks aims to accelerate the innovation process in order to prepare for future developments of Ariane by involving new players and attracting new types of funding. It also gives us an opportunity to support the emergence of deep tech through access to dedicated funding, while accepting the risks involved in terms of investment and technological development.”

In conclusion, Mr. Le Gall and Mr. Roussel agreed that ArianeWorks is about acceleration, inspiration and guidance, in its drive to promote disruptive innovation through the emergence of new players and its emphasis on experimentation and agility.