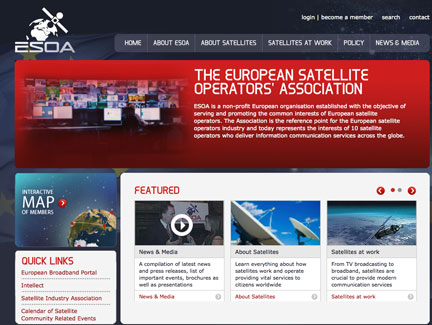 Link to ESOA's homepage
[SatNews] Delivery of satellite services throughout Europe where the subject of this recent meeting...

Satellite services are key to delivering 100 percent broadband coverage in Europe, as European Commissioner for Digital Agenda, Neelie Kroes recognizes the crucial role played by this technology. Satellites will deliver broadband Internet to the 10 million EU households currently lacking such capabilities by 2013. The Commissioner recognized that satellite “can provide a great contribution to deliver the important goal of basic broadband for all” especially for the 10 million underserved household in rural and isolated areas where “wired networks, which works well for the majority, may become prohibitively expensive”. She explained that “new satellites offer downloads at 10 Megabits per second, which compares well against many of the wired ADSL speeds consumers now receive. In the years to come we may even see speeds significantly higher – a possibility that indicates satellite has a major and long-term role to play in delivering higher speed broadband”. Commissioner Kroes participated at the conference Every European Digital – the Challenge of Bridging the Broadband Gap, which was organized with ESOA as knowledge partner to define the way forward to achieve 100 percent broadband coverage in Europe by 2013.

In this respect, Michel de Rosen, CEO of Eutelsat and a member of ESOA’s Board, highlighted the full capability of today’s satellites to deliver triple-play services to consumers, including broadband Internet with speeds up to 10Mbps, irrespective of location. “Satellite technologies are now delivering a level of performance that make them an immediate solution for drawing more European users into the Knowledge Society. With their seamless coverage of the entire European territory they are a fast and cost-effective route to extending connectivity, especially for the many areas not addressed by terrestrial operators because of lower population density.” The event was hosted by MEPs Edit Herczog and former Commissioner Danuta Huebner, the present chair of the European Parliament’s Regional Development Committee. Mrs. Herczog reminded all participants that the Broadband for All deadline proposed for at the end of 2010 by President Barroso’s Economic Recovery Plan had already been delayed. “Applying the traditional approach of wiring each and every region will leave remote areas waiting for years before roll out plans reach them. This is discrimination; we must avoid splitting the EU into a connected and an unconnected one. We need to act now”.

Danuta Huebner emphasised the need to prioritize projects that deliver connectivity quickly. “The EU is full of diverse geographies, the Polish marshlands are just one example, where it is not realistic to expect wired connectivity to come in any reasonable timeframe or even at acceptable cost. For such areas, regions have to be creative and exploit other technologies available today, such as satellite”. Speaking alongside Mrs. Huebner, Commissioner Hahn reinforced the need for prioritisation. “I encourage Member States to make economically efficient investment decisions into suitable technologies which can deliver quick results towards territorial and social cohesion and make best use of available and currently underspent structural funds. Satellites have a clear role to play in this regard as they can contribute to reach the Lisbon Treaty objective of reducing disparities between development levels across all regions and countries of the EU”.

ESOA Secretary General, Aarti Holla, pointed out that despite a clear political objective, increasing user needs and the availability of funds, the challenge to bridge Europe’s digital divide still remains. “We are asking local authorities to move away from a one size fits all approach, to think pragmatically and to be creative in finding solutions for their unconnected areas. We believe that Brussels can help Member States by informing their representatives about the different technology options available today and by providing guidance on how to properly procure the required services in a manner that allows all operators to respond.” Both MEPs Herczog and Huebner concluded the event by calling on the Commission to take “immediate action”; first to make appropriate revisions to its State Aid Guidelines for Broadband in order to allow all technologies to compete; second, to be pro-active in supporting regional authorities in identifying appropriate solutions & adopting best practices; and third, to propose centrally defined guidelines on how to draft procurement specifications in a neutral and goal-oriented manner. They also reinforced the need for dedication of funds at EU level specifically for meeting the 2013 objective. In addition to Commissioners Kroes and Hahn, speakers included several MEPs, the U.S. and Australian Ambassadors to the EU, as well as representatives from other international institutions, trade associations and private companies. They reaffirmed their conviction of the essential role of satellite communications in achieving the 2013 objective of delivering total broadband Internet access to citizens across all EU member states.