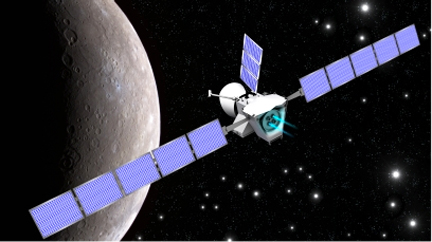 This illustration shows the Mercury Composite Spacecraft approaching Mercury, where the two orbiters will separate and be deployed in their dedicated orbits.
[SatNews] BepiColombo, an ESA mission to the planet Mercury in collaboration with...

...the Japanese space agency, JAXA, is now planned for launch in a window opening in August 2015. While ESA had previously been targeting a launch in July 2014, a 2015 option has always been built in to the development plan, as part of the risk mitigation strategy.

Mercury is a planet of extremes, with its very high density, surface temperature, and strong interaction with the solar wind. Understanding its properties and origin will give scientists important insights into the evolution of the Solar System. BepiColombo involves a carrier spacecraft and two separate orbiters, one developed by ESA and the other by JAXA, dedicated to a comprehensive exploration of Mercury and its environment. So close to the Sun, the spacecraft will have to endure hostile conditions, in particular temperatures reaching over 450 degrees Celsius. A number of new and critical technologies have had to be developed in order for the mission to reach Mercury and operate there. These include the solar arrays, the electric propulsion system, the antenna assemblies, and the complex thermal management system.

The industrial contractors (led by Astrium GmbH in Friedrichshafen, Germany) working with ESA on the mission have recently assessed the current status of the development of these items and have concluded that the first launch window of July 2014 can no longer be met. Launch opportunities of typically one-month duration for BepiColombo are dictated by positions of the Earth, Venus, and Mercury, allowing the spacecraft to follow its intricate interplanetary trajectory. The next launch opportunity to Mercury occurs in August 2015 and is consistent with the projected completion date of the spacecraft, including margins. All stakeholders, including the Science Programme Committee and the international partners, have been made aware of the issues affecting the launch date.