RUAG Space Is Intent On Sensational Separation For Schiaparelli

Now that the spacecraft has reached Mars orbit, the Schiaparelli lander will be released on October 16th, reaching Mars’s surface three days later. Schiaparelli’s purpose is to test technology for a controlled landing on Mars’s surface. Technology provided by RUAG Space is set to play an important role in the success of this ambitious mission. 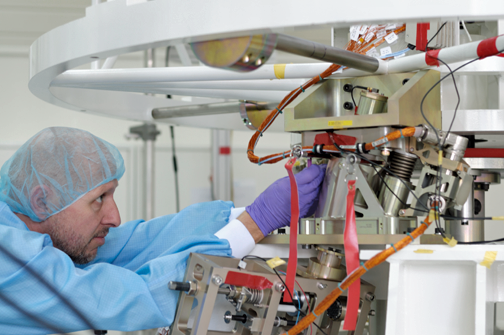 A RUAG Space employee prepares the ExoMars Separation Mechanism for a test. Photo is courtesy of RUAG.

Decoupling the lander—which weighs 600 kilograms—will be aided by a separation mechanism provided by RUAG Space in Zurich. The operation calls for Swiss precision: the lander must detach from the orbiter at exactly the right speed so that it falls at precisely the right landing point. Once Schiaparelli has detached, there is no further opportunity to correct its course.

ExoMars is a joint program between the European Space Agency ESA and the Russian space agency Roskosmos. The principal contractor is the French-Italian company Thales Alenia Space—the mission’s objective is to find out if there has ever been life on the Red Planet, or if such could exist today. Plus, this is also an opportunity to test new technologies for future Mars missions, manned and unmanned. 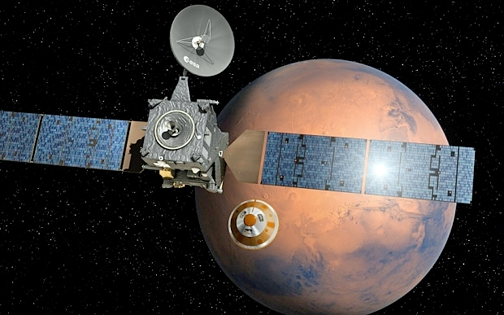 Artistic rendition of the ExoMars mission.

There are two parts to the ExoMars program. The first mission consists of the Trace Gas Orbiter and Schiaparelli lander, which have now reached the Red Planet. The second mission will launch in 2020 and will deposit a European Mars rover and a permanent Russian station on the surface of Earth’s neighboring planet.

For the next six years, the ExoMars Trace Gas Orbiter will monitor the Red Planet from its orbit of 400 kilometers. Protection from the extreme temperatures of space will be accorded via a shell developed and manufactured by RUAG Space in Vienna. The thermal insulation comprises multiple layers of extremely thin metallized plastic film, specially designed for the demands of the Mars mission and individually tailored to the satellite’s complex surface geometry. RUAG Space has also provided the control computer for the Trace Gas Orbiter and the slip rings for the pivoted solar panels.