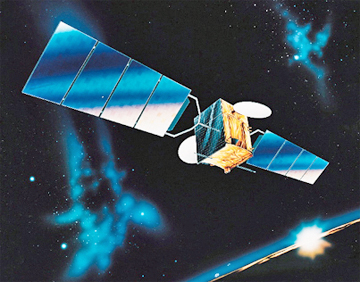 Artistic rendition of the AMOS-5 satellite.

Every single game of the continent's largest and most prestigious tournament will be broadcast in high-definition (HD) via the AMOS-5 pan-African C-band. The tournament will be played by 16 national teams at four sites in South Africa culminating in the championship game from Cape Town. AMOS-5 at 17 degrees East is a prime mover of African sporting events. It has transmitted both the 2012 Olympic and Paralympic games from London to Africa, the South African Super Rugby Games and most recently the Nedbank Golf Challenge, Africa's top international golf tournament. AMOS-5 provides high-quality HD transmission of sporting events on both ad hoc and occasional use bases.

"Sports entertainment is hugely popular and a growing sector in the broadcast field, especially African football. Spacecom's AMOS-5 at 17 degrees East has a powerful C-band whose pan-African capabilities provide high-quality HD transmission to all of Africa," said Eyal Copitt, Spacecom's senior vice president of sales for Africa and Asia and marketing. "AMOS-5 meets the tournament organizers' needs for bringing all of the action to viewers all around the continent."

AMOS-5 was designed and built specifically for the African market with a pan-African C-band beam and three Ku-bands that cover the continent and provide connectivity to Europe and the Middle East. The satellite's position enables its signal to reach every region in Sub-Saharan Africa.