An OBH First Arrives In Kourou 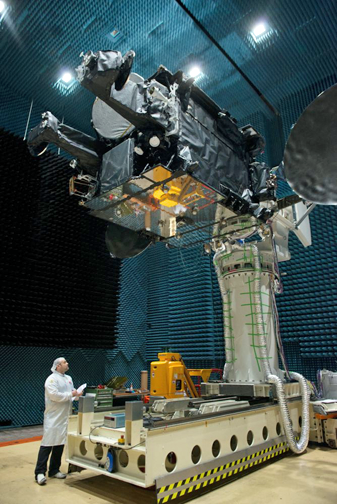 OHB developed the versatile geostationary satellite platform called SmallGEO series* within ESA’s Advanced Research in Telecommunications Systems (ARTES) program. The first satellite, H36W-1, was built under a public-private partnership between ESA, OHB and Spanish satellite operator HISPASAT. With H36W-1, HISPASAT plans on supplying the Iberian Peninsula, the Canary Islands as well as South America with media services. The satellite will be integrated into their existing fleet of geostationary communications satellites. The satellite is designed for a mission duration of 15 years.

An Antonov airplane carried the communications satellite from Germany to French Guiana. At the Kourou launch site, the experts from OHB will again test their satellite and check all functions before the satellite is integrated in a Soyuz launcher and subsequently undergoes final tests. Satellite launch is scheduled for January 27, 2017. H36W-1 will be deployed in a geostationary orbit of approximately 36,000 km to carry out mission operations.

Marco R. Fuchs, CEO of OHB System AG, said, “The completion of our first geostationary communications satellite is an important milestone in the history of our company. This will spur on our other SmallGEO projects, EDRS-C, Electra and Heinrich Hertz.” 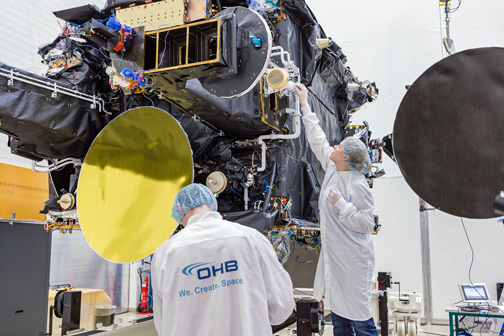 Dieter Birreck, OHB’s project manager for this SmallGEO project, reported that the OHB satellite underwent extensive environmental tests during an 11 month test campaign, after which the spacecraft was declared ready for shipment to the launch site. The cooperation with ESA, HISPASAT, the experts from the test house IABG and partner TESAT has been close and target oriented.

OHB’s Chief Technical Officer and Head Telecommunications Satellites, Guy Perez, added that H36W-1 is the first telecom satellite fully designed, developed, integrated and tested by OHB under close supervision of ESA and HISPASAT. Like any first, this meant a number of technical challenges that the OHB teams had to address in order to achieve customer satisfaction. OHB teams have hence learned a lot in the course of this project and have been able to enhance OHB know-how considerably. The company will make sure that those lessons learned will benefit our future satellite projects, including future telecom satellites belonging to the SmallGEO family.

*) The SmallGEO family of satellites is defined by a broad spectrum of possible configurations to fulfill a variety of mission objectives. These include telecommunications, Earth observation and laser-communication applications from a geostationary orbit. As propellant options clients can choose between classic, hybrid or electrical. Depending on the model, the satellite mass at launch can vary between 2,500 kg and 3,500 kg, whereby the individually permitted payload may vary between 300 kg and 650 kg. OHB is currently also working on the SmallGEO projects EDRS-C, Electra and Heinrich Hertz.