[SatNews] Telesat has been awarded a contract by Shared Services Canada (SSC) to facilitate the provisioning of...

...X-band satellite communications and associated services around the world to SSC partner and client departments. The contract was awarded to Telesat by Public Works and Government Services Canada on behalf of SSC following a competitive bidding process. Telesat will provide SSC with access and operations of X-band point-to-point VSAT communications including satellite space segment, teleport facilities and terrestrial backhaul services on an as-and-when required basis. For the X-band capacity, Telesat will work through an arrangement it has with Astrium Services’ Telecom Governmental Division. Astrium Services owns and operates the Skynet satellite constellation including the Skynet 5 satellites, which possess the highest powered military X-band transponders in orbit. 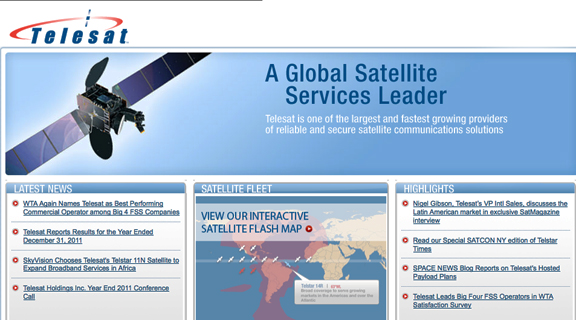 “This contract is a strong endorsement of Telesat’s ability to integrate advanced satellite resources in space and on the ground to meet Government of Canada’s satellite communications needs,” said Paul Bush, Telesat’s Vice President Business Development. “Telesat is pleased to receive this contract award which builds on our 40 year record of delivering reliable and cost effective satellite services to Canada’s federal agencies. By combining the X-band capacity of Astrium Services with Telesat’s satellite expertise and experience managing to Canadian government service standards, Telesat is well positioned to meet Government of Canada’s X-band satellite communications requirements throughout the life of the contract.”

Additionally, Astrium Services, through its Telecom Governmental division, previously entered into a 15 year contract with Telesat for the full X-band payload on Telesat’s Anik G1 satellite scheduled for launch in the second half of 2012. Government demand for reliable, secure and cost effective satellite communications has since continued to expand. The two companies identified a number of Canadian government SATCOM needs they are well positioned to serve together, and this recognition led to their decision to pool select resources in addressing these requirements.