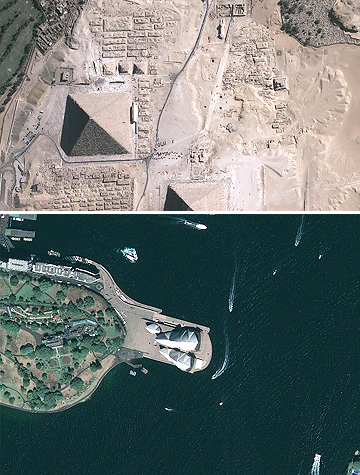 The GeoEye-1 satellite images that are being highlighted by Google were all taken within the last 60 days and include images of the Pyramids of Giza, Mount Fuji, Sydney Australia, and many other recognizable locations. Bill Wilt, GeoEye’s vice president of North American sales, said, “Google is a very important customer with a huge appetite for map-accurate satellite imagery. We will work hard to ensure we meet all of their expectations and provide them a continuous stream of the world’s highest resolution color satellite imagery.” The images were all taken from 423 miles in space as GeoEye-1 moved around the Earth at 17,000 miles per hour. The 4,300-pound GeoEye-1 satellite was launched from Vandenberg Air Force Base, Calif. on September 6, 2008. To view additional imagery examples, access this direct link.

(Photos, courtesy of GeoEye and show the Giza Pyramids and Sydney, Australia)