On June 28, at 23.15 local time, Ariane 5 flight VA 238 started from the launch pad in Kourou — on the top of the rocket, protecting the satellite, was RUAG Space’s payload fairing, the first of its kind that was manufactured out of autoclave. Going forward, this technique, designed for the future European launcher Ariane 6, will bring costs down by 40 percent.

With the new facility and required infrastructure up and running, RUAG is immediately able to run this new process. As a result, the first-of-its-kind payload fairing successfully performed on flight VA238. Meanwhile, Arianespace has ordered from RUAG an additional 18 of these 17-meter long payload fairings for Ariane 5, manufactured out of autoclave. Airbus Safran Launchers is prime contractor and design authority for Ariane 6, an ESA program. 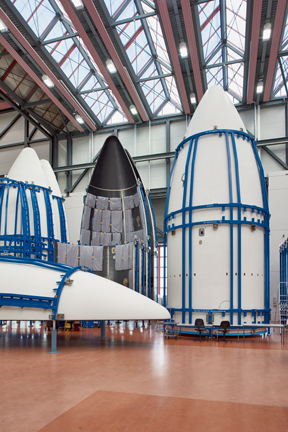 RUAG's out of autoclave fairing. Photo is courtesy of RUAG Space.

To run the new out-of-autoclave process, RUAG has invested in a state-of-the-art manufacturing hall in Emmen, Switzerland. Relying on tailor-made machinery and automated processes, the new composite center was inaugurated in 2016. The carbon-fiber based payload fairing consists of two half-shells, which separate in space. These shells are newly cured in an industrial oven instead of an autoclave. This requires less energy, and — thanks to its size — the industrial oven can cure an entire half-shell in one piece. The costly and time-consuming vertical integration of individual shell elements can be avoided. This reduces throughput time by 50 percent and enables RUAG to increase the delivery volume and sequence for its payload fairings.

Already ahead of VA238, Arianespace and RUAG Space signed the contract for an additional 18 payload fairings for Ariane 5 — which will be delivered from the Emmen facility between 2019 and 2022 with an annual cadence of 6. RUAG will also execute the integration and provide operational support in Kourou. With this contract, the transition towards the upcoming Ariane 6 can be smoothly prepared.

In another first, the next payload fairing manufactured out of autoclave is planned for launch on Vega flight VV10 on August 1, 2017. In addition to the manufacturing facility in Emmen, Switzerland, RUAG also ramps up a site in Decatur, Alabama, to manufacture the Atlas payload fairing out-of-autoclave, as well as started work on the Interstage Adapter for NASA’s Space Launch System — also an out-of-autoclave product.

The new payload fairing was not the only RUAG product on last night’s flight. RUAG also provided the on-board computer steering the 750t rocket towards orbit, as well as the payload adapter connecting the satellites with the rocket.

Peter Guggenbach, the CEO of RUAG Space, indicated that this is a milestone step for the launcher industry in its efforts to make access to space more affordable. Meeting the needs of RUAG customers, the company has invested in new infrastructure, accelerated the process and reduced cost. Highest performance remains guaranteed — as the latest flight proves.

Stéphane Israël, CEO of Arianespace and Head of Civil Launchers of ArianeGroup, stated that this partnership dates back for several decades — with RUAG always proving its readiness to reinvent itself, invest and respond to market needs. Arianespace is proud that the first payload fairing manufactured out of autoclave was launched on an Ariane rocket. This outstanding achievement foreshadows the large gains in competitiveness that will benefit our future Ariane 6 launcher thanks to all partners involved in this program.