[SatNews] ESA's Gaia mission is scheduled to be launched into space on the 19th of December from the European Kourou spaceport in South America—the mission aims to compile a 3D map of our galaxy, the Milky Way, at a resolution that offers unprecedented precision. High-tech products from RUAG Space are playing a major role in making this European scientific mission possible. 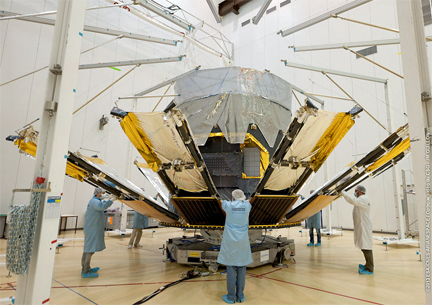 A sunshade with a diameter of 10 meters equipped with thermal insulation made by RUAG Space will shield the spacecraft from sunlight that could hinder its successful operation. In addition, a special RUAG structure known as a thermal tent will protect the telescope's sensitive instruments. RUAG is also responsible for providing the space telescope's central computer.

After launching from the Guiana Space Centre, Gaia will take another four months to reach its final "workplace"—the Sun-Earth Lagrange point L2 located 1.5 million kilometers from Earth. At this point, the Earth is positioned exactly between the satellite and the Sun, which helps provide shade from solar radiation. This makes it ideal for astronomy, especially for space telescopes. From this vantage point, Gaia will be able to monitor approximately one billion stars - some one percent of the content of the Milky Way galaxy. Gaia consists of two telescopes equipped with high-resolution digital cameras, each of which has a billion pixels. The aim of the Gaia mission is to study the origin of the Milky Way and help scientists understand how our galaxy evolved, though astronomers are also hoping that Gaia will enable them to discover new asteroids and planets orbiting other stars.

To shield the images taken by the sensitive telescopes and their digital cameras from sunlight, the satellite will be protected by a giant sunshield. The sunshield, which folds up like an umbrella for launch, will only be deployed once Gaia is in space. To keep this shield as light as possible, its surface is made of a special thermal insulation material developed by RUAG Space. This material was designed and manufactured at RUAG Space in Austria on behalf of the Spanish engineering and technology group Sener. The insulation blankets are supported by carbon fiber frames that were developed and manufactured at RUAG Space in Switzerland. As well as keeping the spacecraft and its telescopes in the shade, the sunshield will also supply the electricity required by the spacecraft and its instruments. For this purpose, electricity-generating solar panels will be mounted on the underside of the sunshield.

The sensitive telescope instruments are housed in the "thermal tent", a special carbon fiber structure developed by RUAG Space in Zurich. The thermal tent prevents the optical bench, mirrors and focal plane array from being exposed to extraneous radiative thermal inputs. Additional thermal insulation from RUAG Space will ensure that the temperature inside the spacecraft remains stable.

The entire payload module must be kept thermally separated from the satellite's service module. The two modules are therefore only connected by very thin struts. However, these would not be strong enough to resist the forces experienced during launch, so additional, thicker struts are used to provide a more robust connection for the launch phase. A sophisticated mechanism developed by RUAG Space detaches these additional struts after the launch.

For additional information regarding RUAG Space, access their infosite at http://www.ruag.com/

To learn more about the ESA Gaia mission, head over to: http://sci.esa.int/gaia/