[SatNews] The flow of hot gas toward a black hole has been clearly imaged for the first time in X-rays.

The observations from NASA's Chandra X-ray Observatory will help tackle two of the most fundamental problems in modern astrophysics: understanding how black holes grow and how matter behaves in their intense gravity. The black hole is at the center of a large galaxy known as NGC 3115, which is located about 32 million light years from Earth. A large amount of previous data has shown material falling toward and onto black holes, but none with this clear a signature of hot gas. By imaging the hot gas at different distances from this supermassive black hole, astronomers have observed a critical threshold where the motion of gas first becomes dominated by the black hole's gravity and falls inward. This distance from the black hole is known as the Bondi radius.

"It's exciting to find such clear evidence for gas in the grip of a massive black hole," said Ka-Wah Wong of the University of Alabama, who led the study that appears in the July 20th issue of The Astrophysical Journal Letters. "Chandra's resolving power provides a unique opportunity to understand more about how black holes capture material by studying this nearby object." As gas flows toward a black hole, it becomes squeezed, making it hotter and brighter, a signature now confirmed by the X-ray observations. The researchers found the rise in gas temperature begins about 700 light years from the black hole, giving the location of the Bondi radius. This suggests the black hole in the center of NGC 3115 has a mass about two billion times that of the sun, making it the closest black hole of that size to Earth.

The Chandra data also show the gas close to the black hole in the center of the galaxy is denser than gas further out, as predicted. Using the observed properties of the gas and theoretical assumptions, the team then estimated that each year gas weighing about 2 percent the mass of the sun is being pulled across the Bondi radius toward the black hole. Making certain assumptions about how much of the gas's energy changes into radiation, astronomers would expect to find a source that is more than a million times brighter in X-rays than what is seen in NGC 3115. 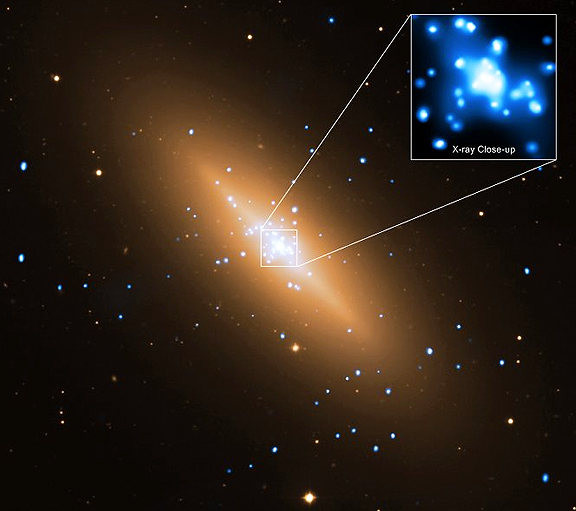 The galaxy NGC 3115 is shown here in a composite image of data from NASA's Chandra X-ray Observatory and the European Southern Observatory's Very Large Telescope (VLT). Using the Chandra image, the flow of hot gas toward the supermassive black hole in the center of this galaxy has been imaged. This is the first time that clear evidence for such a flow has been observed in any black hole. Image credit: X-ray: NASA/CXC/Univ. of Alabama/K. Wong et al; Optical: ESO/VLT

"A leading mystery in astrophysics is how the area around massive black holes can stay so dim, when there's so much fuel available to light up," said co-author Jimmy Irwin, also of the UA in Tuscaloosa. "This black hole is a poster child for this problem." There are at least two possible explanations for this discrepancy. The first is that much less material actually falls onto the black hole than flows inside the Bondi radius. Another possibility is that the conversion of energy into radiation is much less efficient than is assumed.

Different models describing the flow of material onto the black hole make different predictions for how quickly the density of the gas is seen to rise as it approaches the black hole. A more precise determination of the rise in density from future observations should help astronomers rule out some of these models. NASA's Marshall Space Flight Center in Huntsville, Ala., manages the Chandra program for the agency's Science Mission Directorate in Washington. The Smithsonian Astrophysical Observatory controls Chandra's science and flight operations from Cambridge, Mass.