Malaysia shipped their new RazakSAT satellite from the Royal Malaysian Air Force Subang airfield last Saturday to Kwajalein Island in the Republic of Marshall Islands, where the satellite will be launched on April 21st. 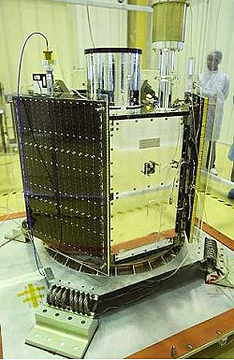 The images from RazakSAT, Malaysia’s first home-grown remote sensing satellite, will be available for purchase from the Malaysian Remote Sensing Agency later this year. RazakSAT is named after the second Prime Minister of Malaysia, Tun Abdul Razak, and is a mini class satellite weighing in at 180 kg and will be the first remote sensing satellite in the world to orbit the equator. Science, Technology and Innovation Minister Datuk Dr. Maximus Ongkili said the equatorial orbiting satellite would enable observations of the earth’s surface to be made more often as compared to a polar orbiting satellite. RazakSAT will be able to revisit the same location four to six times a day and has a 2.5m resolution and was built by Malaysian scientists and engineers. Two other small satellites, CubeSAT and InnoSAT, weighing less than 10kg each, were also attached to the body of Razak­SAT.

CubeSAT was developed by Astronautic Technology (M) Sdn Bhd while InnoSAT was developed by Universiti Sains Malaysia, Universiti Teknologi Malaysia and Universiti Malaysia Perlis and they will be used to take images for R&D purposes. Malaysian Remote Sensing Agency director general Darus Ahmad said a committee comprising government agencies such as the military and police would vet requests for “sensitive” images. With RazakSAT, Malaysia now has its own satellite to monitor security in the country, natural resources, and maritime activity. Before RazakSAT, Malaysia launched TiungSAT-1, which was more experimental in nature and had an 80m resolution, but the satellite ceased operations three years after it was launched in 2000.