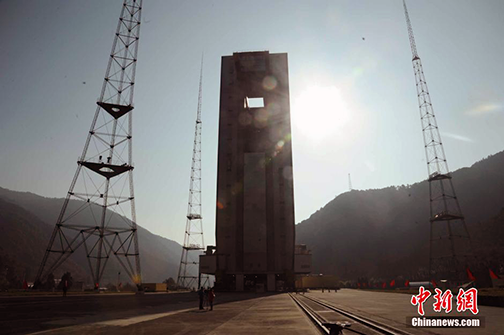 File photo of the he Xichang Satellite Launch Center in Sichuan Province.

In a posting at gbTimes and filed by Andrew Jones, teams at the Xichang Satellite Launch Center in southwest China have been making the final preparations for the launch of an unknown payload via a Long March 2C, which could occur in the coming days.

According to a Xinhua article (Chinese) portraying the dedication of teams at Xichang working through the Dragon Boat Festival long weekend holiday, the last general inspection of the rocket before launch.

The launch will be hosted by Launch Complex 3, which on May 20 witnessed the launch of the Queqiao Chang'e-4 relay satellite and two piggybacking lunar smallsats. The launch vehicle's configuration has been changed from that suitable for the 45.8 meter tall, three-stage Long March 4C used for that previous launch into that required for the 42 meter high, two-stage Long March 2C.

Despite the uncommon occurrence of a state media report indicating an impending minor Chinese space launch, the nature of the payload remains undisclosed. Xichang, based in the mountains of Sichuan Province in southwest China, mostly hosts launches to geosynchronous transfer orbit, as well as the country's lunar exploration missions. However, the launch center has been used four times for Long March 2C launches of trios of Yaogan-30 reconnaissance satellites into LEO since September 2017, with the latest taking place in January.

Other possibilities are speculated on the Nasaspaceflight.com forums, but its identity and purpose may not be known until after launch, if successful. China has Yuanwang 7, one of a number of space tracking ships used to support launches, currently in Pacific waters, with Yuanwang 6 docked at the Port of Suva, Fiji.