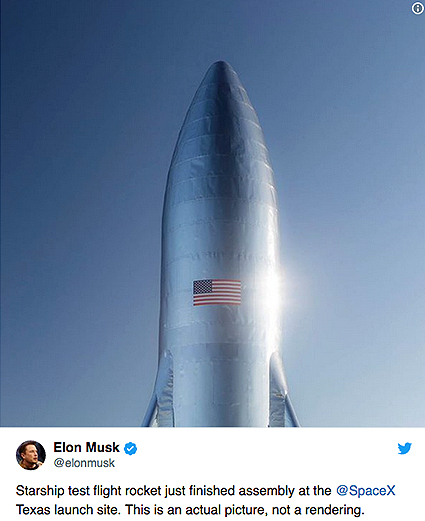 The project formerly known as the BFR (Big Falcon Rocket) made a debut splash for SpaceX and company CEO Elon Musk in September of 2017 at the International Astronautics Congress in Adelaide, Australia.

Musk announced back in November of 2018 that BFR will be known as Starship. On Friday, January 11, Musk stated that SpaceX had completed the installation of a Starship reusable space-rocket system launch vehicle for a suborbital test flight.

There are two Starship sections, the first being the spacecraft (upper stage) and the second being the Super Heavy, which is the rocket accelerator.

According to Musk, this rocket will be able to push as much as 100 tons of payload into orbit; although not addressed by Musk, the assumption is that Starship can be repeatedly flown.

Upcoming are the tech tests to iron out suborbital flight issues, the reason why the Starship rocket prototype was built.