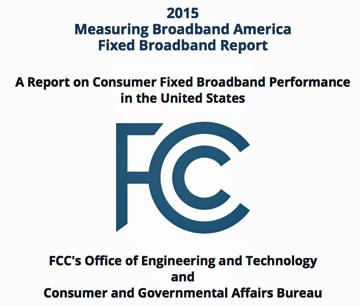 HughesNet satellite broadband service serves more than one million subscribers and is delivered by Hughes Network Systems, LLC (Hughes). The FCC report evaluated satellite, DSL, cable and fiber Internet access services from 16 providers, covering over 80 percent of the U.S. residential marketplace. It found that the HughesNet Gen4 service exceeded advertised download and upload speeds at higher rates than any other satellite or terrestrial broadband provider. Download speeds were consistently more than twice advertised, even during peak usage times. Similarly, upload speeds were more than 1.5 times advertised speed. In addition to over-delivering on promised speeds, HughesNet was one of the top ISPs in limiting network packet loss, which is typically caused by network congestion and can be an important factor in the perceived quality of online applications.

This is the first time HughesNet Gen4 has been evaluated in the “Measuring Broadband America” report, which is published annually by the FCC to document the evolution of broadband service quality, including download and upload speeds and the performance of specific applications, such as Web browsing, VoIP, and streaming video.

Hughes invented the commercial VSAT (very small aperture satellite terminal) and pioneered consumer satellite Internet service and the technology to support it—from satellites to gateways to modems. The top ranking validates the company’s 40-plus years of experience in managing high-speed satellite networks and advancing the state-of-the-art in satellite technology.

“The FCC’s report is especially gratifying because it confirms that HughesNet Gen4 consistently delivers on the performance promised to our customers,” said Mike Cook, senior vice president, North America Division at Hughes. “It gives validation to our entire team of engineers, technicians, customer service representatives, channel partners and installers who work tirelessly to bring the many benefits of Internet access to our ever growing base of subscribers, no matter where they live or work.”