The White House announced on February 1st it will end a civil-military weather satellite program and, instead, pursue two separate lines of polar-orbiting satellites to serve military and civilian users. Terminating the National Polar-orbiting Operational Environmental Satellite System (NPOESS) is not good news for prime contractor Northrop Grumman Aerospace Systems of Los Angeles, which was to supply the satellite platforms and integrate the overall system. 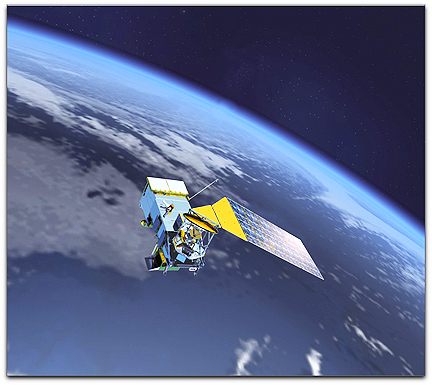 The NPOESS program will now use a different satellite platform, but it remains to be seen whether or not Northrop Grumman will retain oversight responsibility for the instruments and for space and ground segments integration. NPOESS had been managed by the U.S. Air Force and the U.S. National Oceanic and Atmospheric Administration (NOAA), with NASA as a junior partner, with this association now relegated to the trash bin. Under the White House’s new plan, the Air Force will build satellites that will fly the morning orbit to primarily serve military needs, according to an outline released February 1st by the White House Office of Science and Technology Policy. NOAA will then be funding development of satellites flying in the afternoon orbit — their primary objective will be to provide civil weather forecasting and climate monitoring data.

Current plans to launch a precursor satellite — dubbed the NPOESS Preparatory Project — will not be affected by this decision from the White House. This satellite is expected to launch in September of 2011 launch, according to the official document. Key NPOESS sensors will be on board a smaller platform manufactured by Ball Aerospace & Technologies Corp. of Boulder, Colorado. The United States will continue to rely on the European Metop satellites for weather data for the mid-morning orbit, the document said. Jane Lubchenco, who was confirmed as NOAA administrator in March 2009, said the new plan is the best way to ensure weather and climate data continuity.

NOAA’s new satellite program, dubbed the Joint Polar Satellite System (JPSS), will be managed by NASA’s Goddard Space Flight Center, Greenbelt, Maryland. NOAA has requested $1.06 billion for JPSS in 2011 and plans to request an additional $3.47 billion over the four following years, agency budget documents show. The JPSS spacecraft will “consist of platforms based on the [NPOESS Preparatory Project] satellite,” the White House document said. However, it has not been decided whether NOAA will contract with Ball Aerospace to build the satellite platforms or hold an open competition to build them, Mary Glackin, NOAA’s deputy under secretary for oceans and atmosphere, has stated.

NOAA plans to begin procurement of the first JPSS spacecraft this year, with a notional launch date of 2015, according to documents that accompanied NOAA’s 2011 $5.6 billion budget request to Congress. The first satellite will host some of the sensors that were planned for the first NPOESS satellite including: the Visible Infrared Imaging Radiometer Suite; Cross-track Infrared Sounder; Advanced Technology Microwave Sounder; Ozone Mapping and Profiling Suite; and Cloud and Earth Radiant Energy System instrument. As the NPOESS prime contractor, Northrop Grumman currently oversees the development of these instruments by several contractors. While no decisions have yet been made, NOAA would like to see responsibility for these instruments shifted to Goddard, Glackin said. With these and other decisions still to be made, it is too early to assess the impact to Northrop Grumman of the NPOESS program changes, company spokesman Lon Rains said.

The Air Force has not yet devised plans for its future weather satellites as its current-generation spacecraft will not require replacing until later this decade. The service has two Defense Meteorological Satellite Program (DMSP) spacecraft scheduled to launch in 2012 and 2014. The Air Force requested $351.8 million in 2011 for a program that budget documents identified as NPOESS, but no plans were detailed. In addition to operating its own weather satellites, NOAA has for the last decade operated the DMSP satellites for the Air Force. The agency plans to continue operating the new civil and military weather satellites with a common ground system. The first version of the NPOESS ground system to fly the NPOESS Preparatory Project satellite has been delivered, Glackin said. Raytheon Intelligence and Information Systems of Aurora, Colo., is the lead developer of the NPOESS ground segment.

Giving NOAA responsibility for the remnants of NPOESS is the primary driver of a 2011 budget request for the agency’s satellite operating division, the National Environmental Satellite, Data and Information Service, of $2.02 billion, an $831 million increase from what was appropriated for 2010. In previous years, the Air Force and NOAA evenly divided annual funding responsibility for NPOESS. The satellite shop’s other major development effort, the Geostationary Operational Environmental Satellite-R program, would receive $730 million next year under the White House request. This is $118 million less than the agency anticipated requesting at this time last year for 2011.