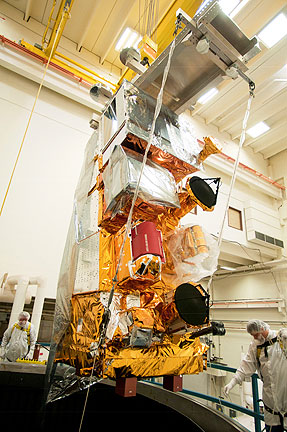 Ball Aerospace has successfully completed thermal vacuum testing for the NPP satellite, as it moves closer to a planned October 25, 2011, launch. Photo courtesy of Ball Aerosapce
[SatNews] A most crucial test has now been passed for this satellite, which will launch later this year...

Ball Aerospace & Technologies Corp. has successfully completed thermal vacuum testing for NASA’s NPOESS Preparatory Project (NPP) satellite to advance the spacecraft closer to a planned October 25, 2011, launch. The two-month-long test, which concluded on April 27, verified that the NPP spacecraft and five-instrument suite meet requirements to function properly in a space-like environment. Post-environmental performance testing is now underway, to be followed by a pre-ship review. In August, the spacecraft will be delivered to the Vandenberg Air Force Base in Lompoc, Calif., for launch preparations. The polar-orbiting NPP satellite will continue providing long-term weather forecasting and environmental monitoring that began following launch of the nation’s first weather satellite on April 1, 1960. Since then, both polar and geostationary weather satellites have provided life-saving planning and decision making information for weather and other natural disasters.

“Given the fact that the U.S. has more severe weather than any other country, it’s crucial that decision makers have seamless data from the nation’s next weather satellite to protect the country’s economic stability,” said Cary Ludtke, vice president and general manager for the Ball Aerospace civil and operational space business unit. “This major milestone puts NPP a step closer to providing those continued observations.” NPP will fly a suite of advanced-technology remote sensing instruments that include:
Under contract to NASA’s Goddard Space Flight Center, Ball Aerospace is providing its BCP 2000 spacecraft bus under fixed-price terms for NPP, and as well as the Ozone Mapping and Profiler Suite (OMPS) instrument. NPP has a seven-year design life, with a five-year mission life and incorporates both MIL-STS-1553 and IEEE 1394 (Fire Wire) data. In addition, NPP’s Common Ground System will be employed for the first time.