[SatNews] GlobeCast has been selected to deliver four major Latin American channels via its capacity on the AMC-1 satellite to cable headends throughout the United States. Cinelatino, 52MX, TV Colombia and NTN 24 are the latest broadcasters to join GlobeCast’s powerful but cost-effective platform at 103 degrees West. In addition to transport, GlobeCast will be providing two of these channels with regionalization and program substitution services 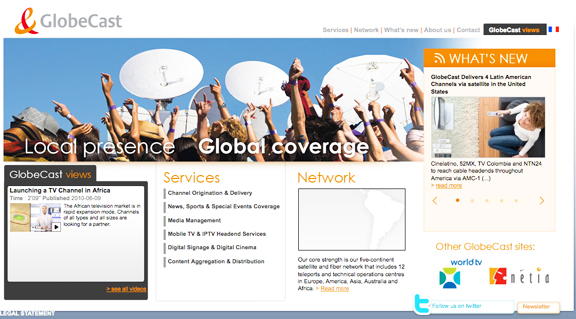 NTN24 homepage...
NTN24 “Nuestra Tele Noticias 24 horas” is the new, original, Spanish- language global news network presented by top journalist from the US, Latin America and the world. Up to the minute news, specialty and opinion programs including “Bayly” with the controversial Jaime Bayly and La Noche hosted by renowned veteran journalist Claudia Gurisatti are just a few of the highlights.

Cinelatino and 52 MX have called on GlobeCast for satellite turnaround, uplink and space capacity on the AMC-1 satellite. Cinelatino is the leading Spanish-language premium film channel in the United States, with more than 3.6 million cable and satellite subscribers on major cable, satellite and telephony providers throughout North America. Cinelatino is jointly-owned by Grupo MVS, InterMedia Partners and Panamax Films.

52MX offers original entertainment and programming from Mexico. More than 50 percent of the channel’s content is produced in-house with its talented team. The channel is broadcast throughout Mexico and the United States and prides itself on showing the most diverse and original content on the air.

GlobeCast has been ramping up its activities in Latin America in the past year, opening two new links on its international fiber network to Buenos Aires and São Paulo, and signing customers from around the region. Most notably it announced a deal with Argentine broadcast giant Pramer, to playout and deliver eight of its channels in North America.