A spacecraft that will demonstrate a range of innovative technologies to clean up space debris has now been deployed from the International Space Station (ISS) and will soon begin its experiments in orbit.

RemoveDEBRIS, one of the world’s first attempts to address the build-up of dangerous space debris orbiting Earth, was sent to the ISS via the SpaceX CRS-14 launch in early April. The satellite was designed, built and manufactured by a consortium of leading space companies and research institutions, led by the Surrey Space Centre at the University of Surrey. The project is co-funded by the European Commission. 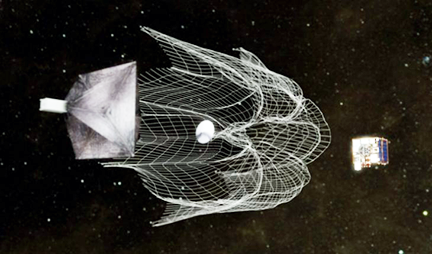 Artistic rendition of the RemoveDEBRIS spacecraft.

The RemoveDEBRIS mission will perform four experiments, including the first harpoon capture in orbit and a net that will be used on a deployed target. The team will also test a vision-based navigation system that uses cameras and LiDaR technology to observe smallsats that will be released from the main spacecraft. Finally, the RemoveDEBRIS craft will deploy a large sail that will drag it into the Earth’s atmosphere, where it will be destroyed.

This ISS satellite deployment opportunity was made possible thanks to NanoRacks and their Space Act Agreement with NASA’s U.S. National Labs.

The consortium consists of:

NanoRacks created the Kaber system to accommodate the increasing customer demand for commercial opportunities to deploy smallsats from the International Space Station. Kaber offers deployments for satellites up to approximately 85 kilograms, and NanoRacks is able to provide Kaber launches on both SpaceX and Northrop Grumman Innovation Systems (previously Orbital ATK) commercial resupply missions.

Professor Guglielmo Aglietti, Director of the Surrey Space Centre at the University of Surrey and Principal Investigator for the mission, said that after almost five years of development, it is exciting to finally be in a position where these technologies can be tested in the field. If successful, the technologies found in RemoveDEBRIS could be included in other missions in the very near future.

Sir Martin Sweeting, Chief Executive of Surrey Satellite Technology Ltd. (SSTL), added that SSTL’s expertise in designing and building low cost, smallsat missions has been fundamental to the success of RemoveDEBRIS, a landmark technology demonstrator for Active Debris Removal missions that will begin a new era of space junk clearance in Earth’s orbit.

NanoRacks External Payloads Manager, Conor Brown, stated that it’s wonderful to have helped facilitate this ground-breaking mission. RemoveDEBRIS is demonstrating some extremely exciting active debris removal technologies that could have a major impact to how space debris is managed moving forward. This program is an excellent example of how small satellite capabilities have grown and how the Space Station can serve as a platform for missions of this scale.

The project is co-funded by the European Commission and the research learning to the results have received funding from the European Union Seventh Framework Program (FP7/2007-2013) under grant agreement #607099.

Additionally, the spacecraft features three Airbus technologies to perform Active Debris Removal (ADR): a net and a harpoon to capture debris as well as a Vision Based Navigation (VBN) system to develop rendezvous techniques in orbit with space debris. The spacecraft itself was designed and built by Airbus subsidiary Surrey Satellite Technology Limited (SSTL) and also includes a drag sail to speed up deorbiting of the whole mission. 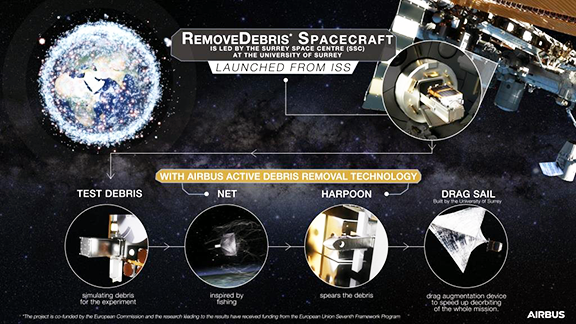 The mission timelines will see the net deployed in October this year, followed by the VBN test in late December and then the harpoon in February 2019. The experiments will all be carried out below the orbit of the ISS. The net experiment, developed by Airbus in Bremen, will witness a cubesat deployed from the main mission craft. When the cubesat is five meters away, it will then be targeted by the net and captured at approximately seven meters before it floats away to de-orbit.

The Airbus Stevenage designed harpoon will see a 1.5 meter boom deployed from the main spacecraft with a piece of composite panel on the end. The harpoon will be fired at 20 meters/sec to penetrate the target and demonstrate the ability of a harpoon to capture debris. After completion of the Airbus designed ADR, the main spacecraft will deploy the drag sail developed by SSC which will deorbit the craft in approximately eight weeks. Without the drag sail, deorbiting would take more than 2.5 years.

Nicolas Chamussy, Head of Airbus Space Systems said the company has spent many years developing innovative active debris removal systems to be at the forefront of tackling this growing problem of space debris and to contribute to the UN's Sustainable Development Goals for future generations.

A video is available at this direct link...