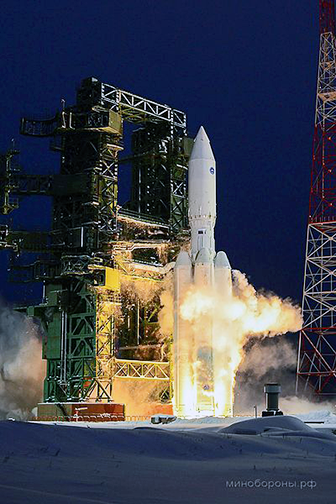 Photo of the first test launch of the Angara F5 rocket at Plesetsk in 2014.

Photo is courtesy of Andrei Morgunov.

The inaugural launch of the Russian Angara-A5M rocket from the Vostochny Cosmodrome is planned for 2025, this according the Deputy General Director of the TsNIIMash science Center, Alexander Medvedev.

Medvedev also stated that the Angara-A5B, which is an additional version of the A5M and packs an oxygen-hydrogen upper stage, is planned for launch in 2027.

The main task of the Angara rockets will be placing existing and future heavy Earth satellites (communication satellites, meteorological satellites, space vehicles for the Ministry of Defense) and other spacecraft into high-energy orbits such as the geostationary orbit and into Moon-bound trajectories.

On June 20, Dmitry Rogozin, General Director of the Roscosmos State Corporation, announced that the Khrunichev Space Research And Production Center will continue to drive the development of the Angara-A3 medium-range rocket.