AGI's CGI Rendering Of Zombie And AMC Sats — Warning May Cause Motion Sickness! 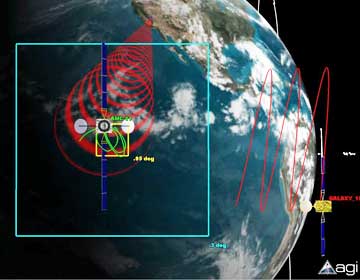 [SatNews] At the SES World Skies' site you can view an amazing CGI rendering created by AGI that reveals the AMC-11 orbital maneuvers to hopefully avoid their cable broadcasts from being interrupted by Intelsat’s Galaxy 15, aka Zombie satellite. The satellite is so named because of Intelsat's inability to control the Galaxy 15 after a solar storm on April 5 that created this renegade satellite. While Galaxy 15 (Zombie sat) is operational, it by no means is conforming to the orbit originally intended, and Intelsat cannot control the spacecraft, which is drifting away from its orbital slot at 133 degrees West and east toward AMC-11, which is located at 131 degrees West. The two satellites operate on the same frequency, and Galaxy 15 could interrupt signals AMC 11 provides for the United States.

This rendering emulates the Galaxy- 15's current path which is a continual circle pattern, and the choreography-type plan of SES World Skies' to side-step the satellite.

Described here: "As the stray satellite nears AMC-11's orbital location at 131 degrees west, SES WORLD SKIES plans to have AMC-11 match the eastward drift of Galaxy 15 in order to maintain a minimum separation between the two satellites. This synchronized drift is designed to protect AMC-11 services from interference caused by Galaxy 15.

At the same time, SES WORLD SKIES will move its new SES-1 satellite to the opposite side of Galaxy 15, thereby enabling some customers, including cable television networks, to leapfrog their broadcasts over interference caused by the wandering spacecraft. Customers will either be able to maintain services on AMC-11 during its drift, or repoint antennas to SES-1 in order to best protect their services.

For those customers who will stay on AMC-11 throughout the mission, their television programming will be delivered over a large 19-meter antenna capable of minimizing potential disruptions. SES WORLD SKIES expects to initiate the synchronized eastwards drift of AMC-11 on May 25, and estimates that the risk of interference will end on June 7 when Galaxy 15 exits the area about 22,000 miles above the earth's surface. 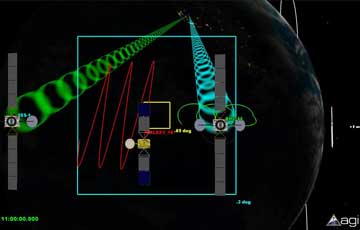 "This extraordinary technical initiative underscores our commitment to finding innovative solutions to minimize the impact of an unexpected event like this on our customers," said Alan Young, Chief Technology Officer for SES WORLD SKIES. "A team of our best engineers and scientists is working around the clock to ensure the success of this unprecedented mission."  Young also noted that the company has been in regular close contact with its customers in order to brief them on the operation and prepare them for the necessary maneuvers.

There is no risk of a physical collision of the two spacecraft – contrary to suggestions is some press articles recently.

There is, however, the possibility of multi-path interference to AMC-11’s services caused by Galaxy-15 relaying off axis emissions from AMC-11 uplink antennas. In order to minimize or eliminate such interference several mitigation strategies will be deployed as follows:
SES WORLD SKIES believes that a combination of the 3 strategies above when applied to AMC-11’s services will minimize any interference to the vast majority of cable systems and more importantly will not require significant changes to ground receive equipment at cable operators’ facilities.