...1,075 satellites will be built for launch worldwide over the next 10 years (2012-2021). Revenues from the manufacture and launch of these 1,000+ satellites will be worth $198 billion, up 36 percent from that generated by the 800 satellites launched in the past ten years. In 2011, the industry entered a growth phase with 100 satellites launched that year, an activity unknown since the late 1990s when the first generation of the two commercial constellations for global mobile personal communications were deployed into low Earth (LEO) orbit. In the next six years, an average of 120 satellites should be orbited each year, then the launch tempo will decelerate at the end of the period as government and commercial satellite constellations complete their deployment.

Governments worldwide are responsible for almost two-thirds of the 1,000+ satellites to be launched and for the same proportion of the $198 billion expected in revenues. With 260 satellites to be launched in the decade ahead, Earth observation is the largest satellite application for governments that operate electro-optical and radar satellite systems through national agencies, multilateral cooperation and public/private partnerships.

Satellite demand of civilian government agencies will be much stronger than that of military agencies since military space remains concentrated in a limited number of countries for dedicated applications such as imagery intelligence. Despite the continuous emergence of new space countries globally, the six established space powers continue to dominate 85 percent of future government satellite demand. According to Rachel Villain, Director for Space at Euroconsult and Editor of the research report, “Governments in established space countries continue to drive innovation for satellite systems with benefice for their local industries even if systems’ replacements are more carefully assessed in the countries where cost limits become stricter.” Emerging space countries should represent a market of 110 satellites of different size and capabilities to be developed by local suppliers with the support of foreign companies.

In the commercial space sector, almost 75 percent of recent satellite orders will be launched to replace aged satellites operational in geostationary (GEO) orbit. The sector is made of 50 companies that procure and operate GEO satellite systems to retail satellite bandwidth for communications and broadcasting services. Despite consolidation through mergers and acquisitions, the sector has enlarged significantly in recent years with numerous government-backed operators acquiring their first satellite to become independent from third parties for satellite bandwidth. 15 satellites are now under development for newcomers such as Turkmenistan, Laos, and Belarus.

Commercial satellites outside the GEO orbit will boost with 120 units to be launched into low and medium Earth orbits in the decade ahead. According to Euroconsult, the market value to manufacture and launch these 120 satellites will be less than 10 percent of that derived from commercial GEO satellites. 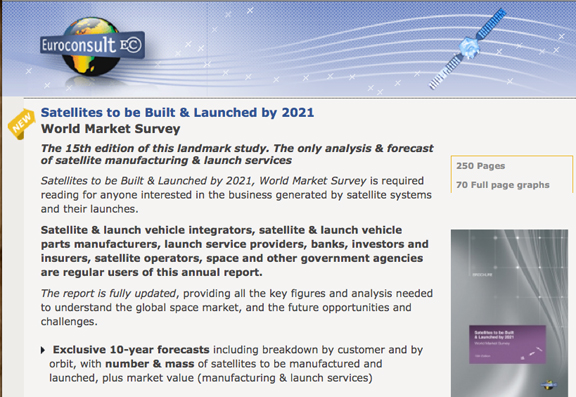