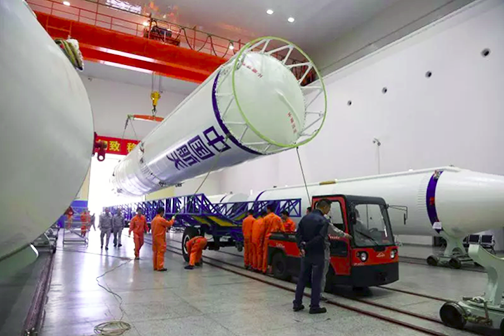 Preparations for launch of the Beidou-3 M5 and M6 satellites via Long March 3B from Xichang Satellite Launch Centre in Sichuan Province in March 2018.

Photo is courtesy of CASC.

China is planning to launch the nation's next pair of satellites for the Beidou navigation and positioning system on Wednesday, this according to China's airspace closure notices, according to a report filed by Andrew Jones of the gbTimes infosite.

A Notice to Airmen (NOTAM) filed last week indicates a window of 1358-1432 UTC (21:58-22:32 local, 9:58-10:32 Eastern) for a launch from the Xichang Satellite Launch Centre in Sichuan Province, southwest China. If the launch goes according to plan, the mission will see the 12th and 13th Beidou satellites put into orbit this year alone, with the country pushing to complete the system of 35 operational satellites in 2020.

Ran Chengqi, director of the China Satellite Navigation Office (CNSO), recently stated that seven Beidou satellites would be launched before the end of November, indicating that two more similar launches and another to send a single satellite to a geosynchronous orbit will follow, all from Xichang. Xichang will then host the launch of the Chang'e-4 lunar far side lander and rover mission sometime in December.

Wednesday's launch will be China's 25th of a record-breaking year, with the country potentially reaching 40 orbital launches across 2018.

To read the remainder of this story, please visit this direct infolink to gbTimes...