Intuitive Machines has selected SpaceX to launch their lunar lander, Nova-C, to the Moon in 2021 on a Falcon 9 rocket.

Intuitive Machines President and CEO, Steve Altemus, said the company is thrilled to sign with SpaceX to take Nova-C on its first mission to the moon. SpaceX’s ability to make low-cost, quality, lunar transport is paramount to completing NASA’s Commercial Lunar Payload Services (CLPS) contract and Intuitive Machines becoming the first commercial company to land on the Moon.” 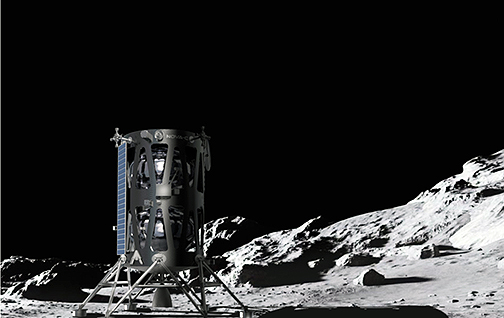 Intuitive Machines reviewed proposals from multiple launch providers and ultimately selected SpaceX for its proven record of reliability and outstanding value. Nova-C will launch on a Falcon 9 rocket from historic Launch Complex 39A at NASA’s Kennedy Space Center in Florida.

Gwynne Shotwell, President of SpaceX, honored that Intuitive Machines selected Falcon 9, SpaceX’s tried and true workhorse, for this pioneering mission to the Moon,  and stated that this partnership with Intuitive Machines is a great example of two private companies working together with NASA to advance space exploration.

Powered by the liquid methane main engine, Nova-C can deliver at least 220 pounds of space technology and instrumentation cargo to anywhere on the lunar surface. On its maiden mission in 2021, Nova-C will carry 5 NASA CLPS payloads to the lunar surface and transmit scientific data back to Earth during 13.5 days of activity on the moon.