Inmarsat has announced that Airbus Defence & Space has been selected as the firm's satellite manufacturing partner as part of a ground-breaking development of its Global Xpress (GX) network. The partnership will provide a step-change in GX’s capabilities, capacity and agility for the benefit of existing and future Inmarsat customers, partners and investors.

Inmarsat’s GX network was first designed in 2010 and began global services in 2015. This created the world’s first and only seamless global mobile broadband network. Inmarsat has since grown GX revenues strongly and established leading positions in the emerging global Maritime, Aviation and Government mobile satellite broadband markets, with GX revenues increasing by 85 percent to $250.9 million in 2018.

This announcement marks the start of the next phase of GX’s evolution, enhancing global mobile broadband coverage with a transformation in network capacity and service capability. This transformation, together with the unparalleled agility of the next-generation satellites, will ensure GX remains at the forefront of innovation for the benefit of customers and partners.

This contract with Airbus is for the manufacture of three next-generation GX satellites (GX7, 8 and 9), with the first scheduled to launch in H1 2023. The level of capital expenditure under this program is in line with that provided for in our long term planning. As such, there is no change to the company's overall capex guidance on the back of this announcement. 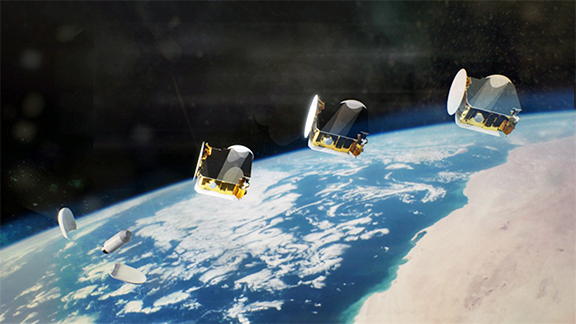 This new satellite program will transform Inmarsat’s global network, providing unprecedented agility in space segment deployment, as well as an enhanced ability to adopt and integrate future technology innovation and disruption to the GX product line.

This network development encompasses a major enhancement to the GX ground network, which will deliver full integration of each generation of GX satellites to form a highly secure, interoperable, ultra-high performance network. Future GX satellites offering new capabilities can easily be added to this dynamic framework whenever and wherever demand dictates. The network will also be able to benefit from future technology innovation.

The network will be tailored automatically to the exceptionally fluid nature of customer demand in diverse global mobile broadband markets. This will maximize the efficient deployment of diverse capabilities and enable them to be mobilized instantaneously.

The new GX technology will be compatible with existing terminals, allowing Inmarsat customers to benefit seamlessly from this and future service enhancements. Through regular upgrades by Inmarsat to the GX network capabilities and features, customers will be able to take advantage of future technology innovation.

Having established leading positions in the emerging global Maritime, Aviation and Government mobile satellite broadband markets, Inmarsat is on track to achieve its objective of delivering annual GX revenues at a run rate of $500m by the end of 2020. Today’s announcement reaffirms Inmarsat’s confidence to sustain this growth beyond 2020, whilst simultaneously driving a sustained and meaningful moderation in its infrastructure capex.

A clear advantage of the Airbus production line approach, according to the company, is the accelerated satellite deployment capability. This capability, together with Inmarsat’s well-established GX customer base, will ensure that new capacity can be quickly and accurately matched to demand, leading to a better outcome for customers and a lower risk infrastructure investment program.

With focused, ultra-high-power capacity layered over high demand flight routes and airport hubs during peak hours, the satellites will also target aviation connectivity. The network will immediately relocate capacity in line with real-time flight patterns, new airline routes and seasonal demand surges across the globe, future-proofing the ability for airline customers to invest in a consistently high quality of service for passengers into the future.

The network can rapidly grow capacity for customers through on-orbit repositioning or even launching a new satellite, making it perfectly suited to meet the aviation industry’s ever-changing needs. In addition, each satellite will be equipped for remote upgrades to ensure the network remains at the cutting-edge of innovation. Breaking from industry tradition to enable a faster response to growing customer demand, the next-generation GX satellites will be delivered significantly faster than traditional procurement lifecycles.

The new satellites are scheduled to launch from 2023 and build upon the existing GX high-speed global network, which consists of four satellites already in operation and three more being launched over the next three years, starting with the GX5 satellite later in 2019.

Rupert Pearce, CEO, Inmarsat said that on its launch in 2010, Global Xpress revolutionized satellite telecommunications and, even in 2019, GX remains the world’s only truly seamless global mobile broadband network. As such, I am delighted today to announce the next steps in GX’s development, in partnership with Airbus, which will ensure that customers continue to benefit from GX’s ground-breaking technology and capabilities for many years to come.
Worldwide demand for mobile broadband connectivity has grown exponentially in recent years and the company expects this trend to continue. This next phase in the evolution of the GX network provides a dynamic and powerful answer to the challenges created by this growth in demand, building on the strong foundations we have already established.
Significantly, Inmarsat's new approach, in collaboration with Airbus and other technology partners, will provide the firm with much greater velocity and agility with which to respond to future competitive challenges and to adopt new technologies on a highly dynamic, rolling basis. The company is delighted to be partnering with Airbus who have more than risen to the significant strategic and technological challenges we set them. This announcement signals the start of a new long-term strategic partnership.
GX has rapidly become a very significant and sustained revenue growth contributor for Inmarsat. More importantly, it embodies our strategic, long-term approach to network augmentation as we continue to meet and exceed customer requirements.
In our 40th year, the company moves forward with a radical new model which builds on existing GX investments to deliver a step-change in future GX services and in Inmarsat's ability to help a diverse customer base capitalize on the opportunities afforded by a digital society.” 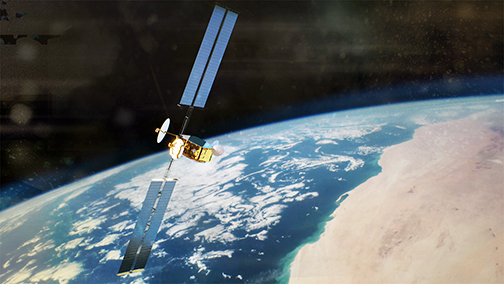 Artistic rendition of a OneSat satellite on-orbit. Image is courtesy of Airbus.

Airbus’ Head of Space Systems, Nicolas Chamussy, added the company is launching the OneSat product line for customer Inmarsat, following the successes of the Airbus-built Inmarsat-4 spacecraft, Alphasat and the Inmarsat-6 satellites, currently under construction.
This latest contract continues the long standing innovation relationship between Airbus and Inmarsat. Onesat is a truly disruptive product, both from a manufacturing and operational point of view, which allows Airbus to offer our customer a market enabling solution with reduced cost and time to orbit.

Philip Balaam, President of Inmarsat Aviation, added that GX is the most advanced and agile satellite network ever conceived and no other provider has a clearer commitment to technology enhancements. Building upon our 40 year heritage in global mobile connectivity, the next evolution of GX is made possible by our investment in an infrastructure built specifically for robust and secure mobility — from high performance satellites, ground stations, hardware, software and cybersecurity, to our unrivaled partner ecosystem.
Inmarsat pioneered an exciting new era for global inflight connectivity with the launch of GX Aviation and we are proud to once again be at the forefront of industry innovation with our game-changing new generation of satellites. The next evolution of GX assures customers that their requirements will continue to be met, not only today, but into the next decade and beyond. It also demonstrates once again that we have the strategic vision, expertise and financial commitment to stay ahead of competitors.