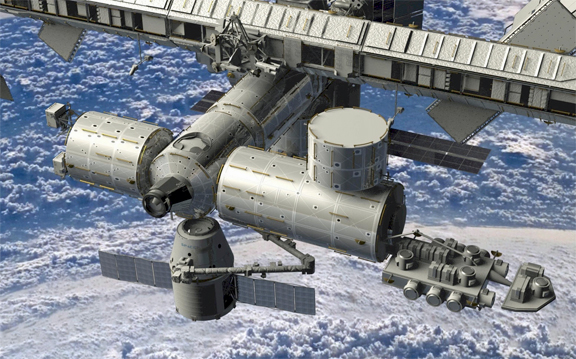 The company's Falcon 9 rocket, carrying its Dragon cargo spacecraft, will lift off at approximately 4:58 p.m. EDT. NASA Television coverage of the launch begins at 3:45 p.m. If for any reason the launch is postponed, the next launch opportunity is Friday, April 18th, at approximately 3:25 p.m. The mission, designated SpaceX-3, is the third of 12 SpaceX flights contracted by NASA to resupply the space station and will be the fourth trip by a Dragon spacecraft to the orbiting laboratory.

The spacecraft will be filled with almost 5,000 pounds of scientific experiments and supplies. The Dragon will remain attached to the space station's Harmony module until mid-May and splash down in the Pacific Ocean off the coast of Baja California with more than 3,000 pounds of experiment samples and equipment returning from the station.

If the launch occurs April 14, NASA TV will provide live coverage Wednesday, April 16th, of the arrival of the Dragon cargo ship to the International Space Station. Grapple and berthing coverage will begin at 5:45 a.m., with grapple at approximately 7 a.m. The berthing coverage starts at 9:30 a.m.